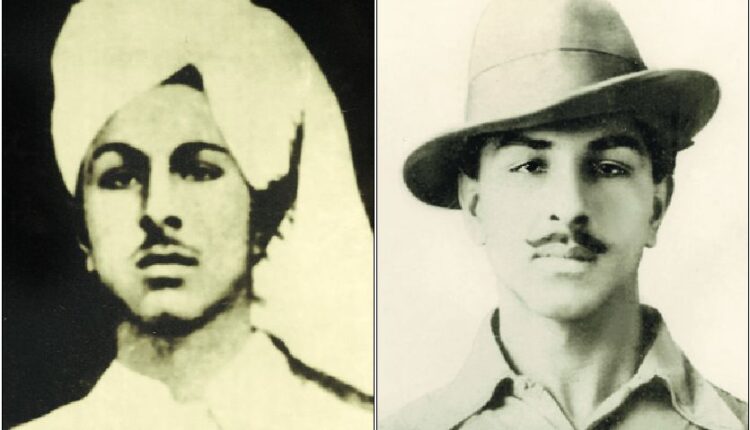 Khatkar Kalan (Punjab):When legendary freedom fighter Bhagat Singh laid down his life for the country’s Independence, there was no way he could have known that people from his village would exercise freedom to settle abroad for greener pastures decades later.

Half of the village’s population of 400 families has migrated to foreign lands, leaving behind the elderly and caretakers. Most of them have migrated to the US, Canada, the UK and Europe.

Aam Aadmi Party (AAP) leader and Chief Minister-designate Bhagwant Mann, who sports a yellow turban for his reverence for Bhagat Singh to whom he calls his “only idol, only mentor and only hero”, has chosen the freedom struggle icon’s ancestral maternal village for his oath on Wednesday.

Khatkar Kalan is a quaint historical self-contained village some 80 km from Chandigarh on the highway to Jalandhar in Shaheed Bhagat Singh Nagar (earlier called Nawanshahr) district with the banking facility.

“They may kill me, they can crush my body, crush my spirit, but they cannot kill my ideas,” reads the colorful graffiti on a village wall with a picture of Bhagat Singh, whose name reverberates at virtually every protest; recently during the year-long protest against the now repealed three farm laws.

The freedom fighter’s ancestral house, where he came to a few times, is located adjoining a palatial house. It is a national monument. No one from his family has lived in the village for the last many decades.

Octogenarian Sukhdev Singh, an owner of one of the swanky houses, told IANS that his children and grandchildren have been settled in Toronto for several years.

“They used to come here in one or two years just for a few weeks. Of and on, we visit Canada to meet them. But my sons almost every year send money for the upkeep of the house owing to its historical relevance.”

He said owing to the historical importance of Khatkar Kalan, it is no longer a village now.

“It’s a modern township with plush amenities. Also NRIs pumped money back home for the facelift of the village,” said another resident Jagtar Singh.

As per archives, the house was built in 1858 by Bhagat Singh’s great-grandfather Fateh Singh, who named it ‘Deewan Khana’, as he used to hold a durbar to deliver justice to the people of his village.

Bhagat Singh’s mother lived in this house till 1975. In 1982 the house was declared a monument under the Punjab Ancient and Historical Monuments and Archaeological Sites and Remains Act of 1964 and the onus of its upkeep and restoration rests with the state government.

However, another octogenarian Balwant Singh, who was sitting on a bench at the well-laid out path in a park, rues that the successive governments have deliberately ignored issues like regular commuting of government bus service to the village, playground and a sewage system.

“Khatkar Kalan is always a hub of political activity. Every Chief Minister comes here for some political mileage. Our main issue, especially of the elders, is the public transport.

“I have never seen a bus stopping in our village. Whenever we apprised the visiting dignitaries, even the Chief Ministers, regarding the issue, they just pass a verbal order and the problem exists. Now we have high hopes from new Chief Minister Bhagwant Mann as he considered Bhagat Singh his idol and whatever he says, he does,” he said.

Nawanshahr, the district headquarters, is 10 km from this village.

Pritam Singh, 75, an emotionally charged resident, added: “Bhagwant Mann has promised to check exodus. He has promised to make such a Punjab that children will no longer go to Canada, but rather the ones who have left the country years ago will return one day. We have to bring our children back.”

Bhagat Singh was born in Banga village of Lyallpur district (now Faisalabad in Pakistan) on September 28, 1907.

He was 23 when the British hanged him in 1931 for his involvement in the Lahore conspiracy case, along with Sukhdev Thapar and Shiv Ramhari Rajguru.

Chief Minister-designate Mann, who dons Bhagat Singh’s trademark ‘basanti’ (yellow) turban and invokes the martyrs with the revolutionary slogan ‘Inquilab Zindabad’ that enables the youth to raise their arms and clench their fists, said no government office will carry a photograph of the Chief Minister.

Instead, photos of Bhagat Singh and B.R. Ambedkar Ambedkar will be put on the walls in government offices.