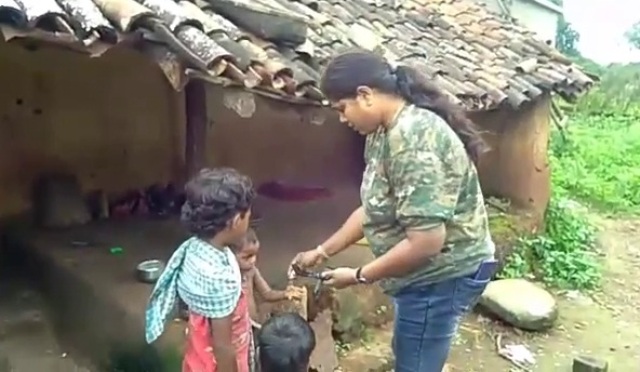 Angul: Contrary to ‘ruthlessness’ image of police officials, a woman cop set an example for others by providing food to four underprivileged and hungry children in Odisha’s Angul district.

Angul Police Station IIC Smrutiprabha Pradhan appeared in a truly exceptional avatar for  hungry kids after she got information from someone about their condition.

Sources said that the compassionate police official visited four underprivileged children at their home after getting an information from Kusumita village in Baradapal panchayat. She offered some food that she had brought for them.

The four siblings with empty stomach happily accepted food and consumed it staring at her face, who was none less than their mother at that moment.

According to reports, the four children’s father Sridhar Munda has migrated to Surat where he is engaged as a labourer. In absence of father, their mother eloped with another man abandoning them at home. The poor grandfather is the only member of the family who is taking care of them through hardship. However, the five used to sleep without food when he fails to earn from his work.

Amidst such situation, the woman cop’s humanly act and sympathy towards poor children has become talk of the town.

Ageing is a privilege: Genelia Deshmukh