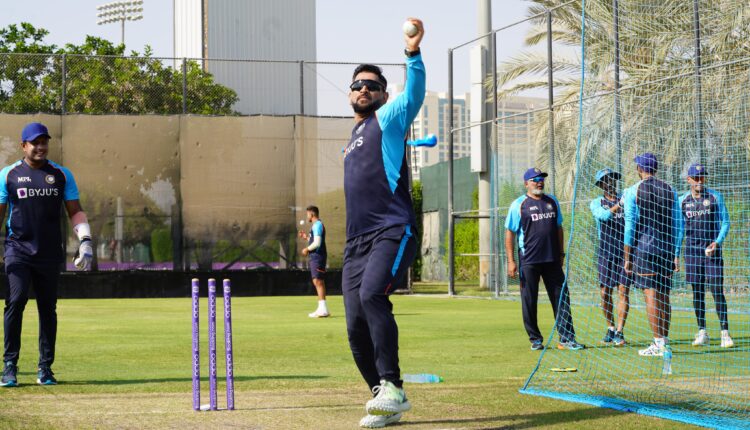 Dubai: Former India captain Mahendra Singh Dhoni seems to have transitioned smoothly into the role of mentor of the Virat Kohli-led side during the ICC T20 World Cup, as the veteran cricketer was seen giving throw-downs to the players ahead of the ‘Super 12’ game against Pakistan here on Sunday (October 24).

Dhoni was recently appointed mentor of the side as India aim to wrest back the T20 World Cup title they won in 2007, defeating Pakistan. The Board of Control for Cricket in India (BCCI) enlisted Dhoni’s services as he was in the UAE guiding Chennai Super Kings to their fourth Indian Premier League title.

The Indian cricket board on Friday posted pictures of Dhoni giving throw-downs to players even as India coach Ravi Shastri and bowling coach Bharat Arun were seen watching the action from a distance. Later, Dhoni also gave wicketkeeping tips to young Ishan Kishan and Rishabh Pant.

The BCCI posted pictures on Twitter and wrote, “Revealing #TeamIndia’s latest throwdown specialist!” Dhoni was also seen in animated discussion with India players during the warm-up games against England and Australia, which the 2007 T20 World Cup champions won by big margins.

BCCI chief Sourav Ganguly has been quoted as saying in the media that the decision to involve the former India cricketer as mentor was not taken overnight. “We wanted to involve MS Dhoni as mentor for long time. Jay (Shah) and I were discussing for a long time about how to involve Dhoni. He has won two World Cups after all and has not left cricket completely. Hopefully, he will be a good addition. It can’t possibly be bad. Let’s see,” Sourav had told Salaam Cricket recently.

Sourav had also ruled out any ego clash between Dhoni, Shastri and skipper Kohli, saying, “Ravi Shastri is the head coach, Virat is the captain and MS will just help them. MS is a mature person; he will know what to say when. I am sure all this was discussed and so hope for the best. He is just for this trip. They are all such big players, I just don’t see any issues,” Ganguly added.

Several Indian players, including all-rounder Hardik Pandya, were happy when Dhoni was given the role of the mentor for the T20 World Cup. Pandya explained how and when Dhoni provided him the kind of support which was required at certain stages during his career.

“He knows what kind of an individual I am. He knows me quite deep. I am very close to him. He is the only person who can make me calm. When all this happened, he knew that I needed support. I just needed a shoulder, which he provided multiple times in my cricketing career,” Pandya was recently quoted as saying.

This would be India’s first World Cup campaign since Dhoni retired in 2020.