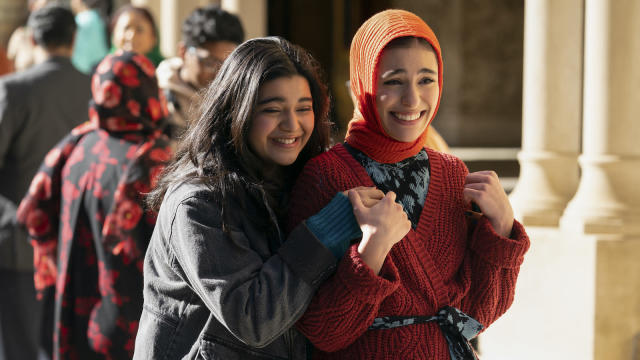 Los Angeles: When Iman Vellani was brought on board for the role of Kamala Khan, the Pakistani American teen superhero also known as Ms. Marvel, it was her debut in acting.

The 19-year-old, Vellani also took on the responsibility of playing the first Muslim superhero.

“I’m honestly so privileged that Marvel trusts me to bring a character like Kamala to life,” Vellani told ‘Variety’.

At the same time, she says: “There’s so much weight that comes with being the first of anything.”

The advice she received from Marvel leadership was simply to be herself. “They’re like, ‘You don’t go to work thinking that you’re the first Muslim superhero; you just go to work and have fun’,” Vellani recalled.

“That’s what I keep telling myself: I don’t really have to go out of my way and advocate for Muslim and Pakistani representation,” she explains.

“This is one story of one girl. We cannot represent all two billion Muslims and South Asians, but this is definitely a good start.”

That methodology has been the keystone for the core creative team behind ‘Ms. Marvel’.

“It’s this crossover from being the other in the room to being the room, that’s the best way to describe it,” says Zenobia Shroff, who plays Kamala’s mother, Muneeba, reports ‘Variety’.

“Not just on set, but behind the scenes, too. We were basically run by strong Brown women, and that’s the way we like it.”

The six-episode series presents Kamala’s origins while she also navigates the turmoil of being a teenager — from the nuances of her relationships with her family and her experiences at home to her high school friends and her mosque in Jersey City.

The aim is to invite audiences to experience Kamala’s Muslim and Pakistani heritage without holding anyone’s hand through it.

“We try to be as authentic and realistic as possible, and the characters wouldn’t explain what that means,” El Arbi says.

“That’s what we wanted to do with this show.”

Ali adds: “I am very wary of justification, of pointing at things and explaining very overtly. I’d much rather it come from a place of it’s just who she is.”

The series weaves in cultural references, like the Khan’s family observation of the holiday Eid, as naturally as the celebrations of Christmas in ‘Hawkeye’.

“The celebrations and the events that we see, and the way that she interacts with elements of the community, it’s the day-to-day life of an American girl,” Ali says.

Menon directed the episode that features Eid, and says she “kind of couldn’t believe” that Disney and Marvel provided the resources for the show to “dial up” the Eid celebration “to feel like a full-blown carnival.”

“Certainly we had a lot of consultation on it with the cultural advisors that were present throughout the show,” she says.

“Sana really guided those conversations, making sure it felt authentic to an experience specific to this community and specific enough to be universal.”

Even the biggest change from the “Ms. Marvel” comics to the series namely, Kamala’s powers, and how she gets them involved her heritage. In the comics, Kamala is part of a subset of people known as Inhumans, many of whom don’t know they have superpowers until their dormant abilities are unleashed � as is the case with Kamala.

Amanat declined to elaborate further about what that means, but she and Ali also saw that shift as an opportunity to tie Kamala’s powers more closely to her identity.

As the premiere episode revealed, they’re sparked after Kamala puts on a bangle her grandmother had mailed from Pakistan, and subsequent episodes will dive even further into exploring how the origins of the bangle — and the abilities it unlocks in Kamala — are deeply entwined with Kamala’s family history, reports ‘Variety’.

“What makes her powers unique and special, is not just coming from this bangle, but from something much bigger and much more personal,” Amanat says.

“That resonates a lot more intensely, at least for me, for Kamala’s story.”

With so many cultural references, both big and small, Ali included a glossary at the top of the scripts explaining some of the language.

“Just so that everybody can be on the same page, whether they’re speaking Arabic or Urdu,” she explains. “It was really about bringing as many people into that process behind the camera, so it felt like they were a part of it, and I think it’s going to expand out into our audiences as well.”

100 special buses from Twin City to Puri for Ratha Jatra