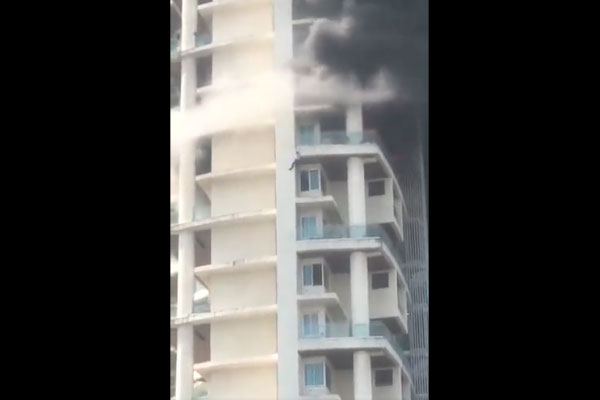 Mumbai: A fire erupted on the 19th floor of a 61-storey residential building in south Mumbai, sending panic waves among the residents and resulting in the death of one person, here on Friday, officials said on Friday.

The blaze broke out in the Avigna Park building in Currey Road around noon, with thick clouds of smoke billowing out, sending the residents scurrying out to safety.

One panicky man was seen coming out of the burning floor, hanging onto a ledge, losing balance and falling to his death below. He was identified as Arun Tiwari, 30, according to the BMC Disaster Control.

At least 15 fire-tenders rushed to the spot and battled the conflagration, attempting to stop the flames from spreading to the higher floors, while Mumbai Mayor Kishori Pednekar went and oversaw the rescue operations.

A majority of the residents managed to evacuate themselves, including several senior citizens and children, though two persons are feared trapped inside.

The cause of the blaze, tentatively believed to be due to a short-circuit, is being probed and the building reportedly has all fire-safety measures in place, said the residents.