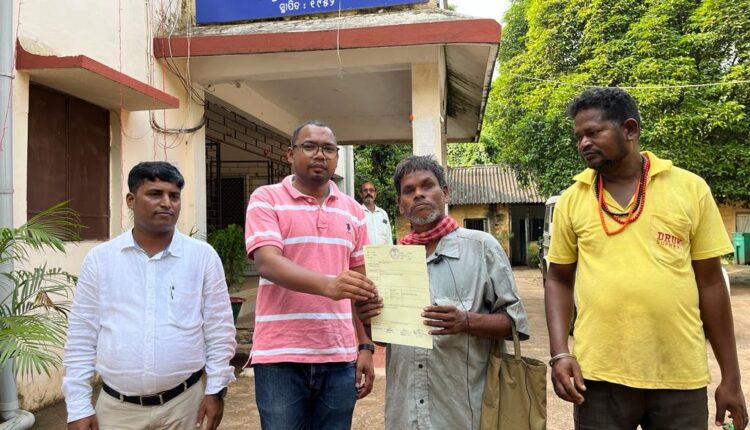 Jajpur: The Jajpur district administration today provided a homestead plot to a visually-challenged person of Kacharasahi panchayat under Korei block days after a video of him making demand for the same through self-composed songs went viral on social media.

The district administration has provided a homestead plot measuring four decimal to Prafulla Kumar Das under the Basundhara scheme of the state government.

“The district administration has provided a homestead plot to Das. The Block Development Officer of Korei has initiated process to allot a concrete house to Das under the housing scheme of the state government,” said an official.

Notably, Das had urged the district administration several times to provide him a homestead land and a house under the state government schemes. However, all his requests fell on deaf ears.

Das recently composed a song to raise his demands before the district Collector.

After receiving the land deed, Das expressed his gratitude to Chief Minister Naveen Patnaik by singing a self-composed song.

“I had been running from the pillar to post for last eight years to have a homestead plot. Finally, my appeal to the Collector through a song brought the desired results. The officials should listen to the poor and needy people for rapid development in Odisha,” Das said.