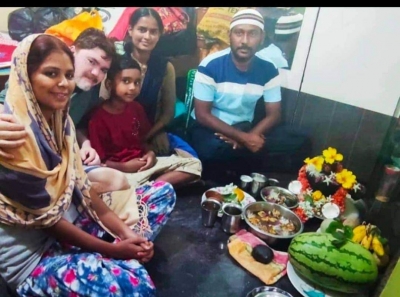 Vijayanagara: Amid the disturbing news of communal clashes and tensions in various districts of Karnataka, the photos and videos of a Muslim family worshipping Shivling have gone viral on social media.

The family of Rasool Hadagali from Kelageri in Kottur town in Vijayanagar district has been praised and appreciated by people of Karnataka for transcending the limits of religion and showing the way forward for tolerance and co-existence.

The family of Rasool Hadagali has been worshipping Shivling since 16 years on Maha Shivratri festival. Rasool’s sister’s family members, in-laws and relatives come to his house for celebrations and special worship. They also do not cook non-vegetarian food on the festival day.

Rasool, works as the Principal of Morarji Desai Residential School in Kandagal taluk, got the Shivling from his father Late Kareem Saab. His father worked as a driver in a local municipality and also did sculpting. He has sculpted Shivling and could not complete the embellishing work.

Rasool Hadagali explains that his father made the Shivling to give it to someone. “We kept it safe and continued to worship Shivling for 16 years during Maha Shivratri,” he says.

The family brings 11 kinds of flowers from nearby hills for the worship of Shivling. The special worship is conducted from 6 p.m. to 9 p.m. during the festival. The family also performs ‘jagran’ (ceremony of waking up throughout the night).

The family members say that they get peace of mind by worshipping the Shivling. This is the gift of harmony, co-existence that is given by our father Late Kareem saab, they maintain.

Are low-carb or gluten-free labels your diet companions?