Muslim girl in UP wins 5 medals in Sanskrit 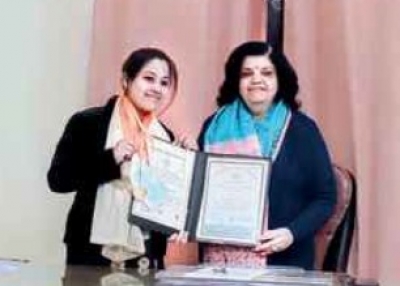 Lucknow:  A Muslim girl in Lucknow University (LU) has won five medals for being the best student of MA in Sanskrit.

Ghazala’s name was announced by LU during its convocation ceremony held in November, but due to Covid-19, medals could be given only to a few students during the ceremony.

On Thursday, Gazala was awarded the medals by dean arts Prof Shashi Shukla during a faculty-level medal distribution ceremony.

Her father passed away when she was in Class 10 and she struggled to continue her education.

“These medals are won not by me but by my brothers — Shadab and Nayab — who left school and began working in a garage at the age of 13 and 10 years respectively so that I could continue to study,” said Ghazala.

Her elder sister Yasmeen, too, began working in a utensil shop while her mother Nasreen Bano took care of their home.

Ghazala lives with her family in a one room house, wakes up at 5 a.m. to offer ‘namaaz’, does all household chores and studies Sanskrit for almost seven hours a day.

She aspires to become a Sanskrit professor.

Ghazala is popular on the campus and recites Sanskrit shlokas, Gayatri Mantra, and Saraswati Vandana during the university’s cultural programmes.

Asked why she chose Sanskrit, Ghazala says, “Of all the languages, God’s own language Sanskrit is the mother. It is divine, and most lyrical. In Sanskrit, poetry is more melodious.”

According to her, her interest in Sanskrit began at the government primary school in Nishatganj where her teacher taught her Sanskrit in Class 5.

“My Sanskrit knowledge and interest often surprise people who ask me how being a Muslim I developed love for the language. They ask me what I will do with it, but my family always supported me,” said Ghazala.

Gazala now wants to pursue a Ph.D in Vedic literature.