Nabarangpur has elected him for nine times in a row! 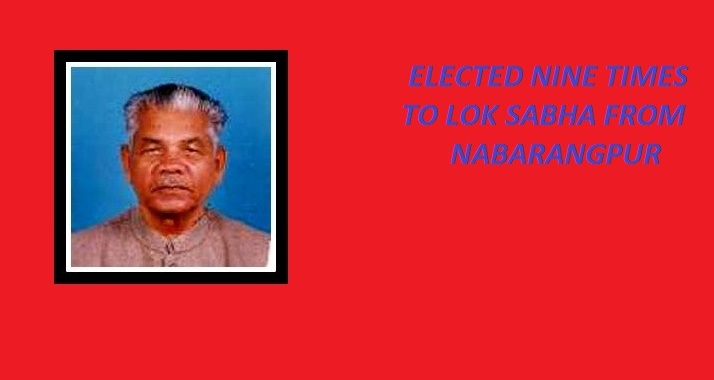 Someone getting elected from the same Lok Sabha constituency on the same party ticket non stop nine times is certainly not an ordinary feat. To write this off as a fluke or to say that this happened only because it was a remote constituency reserved for scheduled tribes, will be an oversimplification reflecting an unwillingness to give credit to the man, who made it possible.

Born to a poor tribal family of Tankadhar Pradhani at village Patrapara in Tentulikhunti block of Nabarangpur district in 1922, Pradhani completed his Intermediate in Arts before joining the State Police Department. His first foray into politics was in 1963, when he was elected as the Chairman of Tentulikhunti Panchayat Samiti. He was given the ticket by Congress party for the first time in 1967 to contest the Nabarangpur Lok Sabha seat, which he won comfortably. And there was no looking back after that. His party kept  choosing him for the same seat election after election and he didn’t disappoint the party either. He won the Lok Sabha elections from the same constituency in 1967, 1971, 1977, 1980, 1984, 1989, 1991, 1996 and 1998. But suddenly he decided to call it a day. While the party was more than willing to offer him the ticket in 1999 for the 10th time in a row, he refused to contest citing health reasons.

It is another story that Congress lost the seat for the first time from Nabarangpur in 1999 after Khagapati withdrew from the scene. BJP’s Parshuram Majhi won the seat in 1999 and repeated the feat in 2004. Though Congress’s Pradip Majhi won it in 2009, the seat was wrested by BJD in 2014.

Khagapati focused on farming  and led a simple life in his village till his death in 2010. But very few discuss about this simple man whose record of winning a Lok Sabha seat for 9 times has been overtaken by only 4 persons in the country so far. They are Inderjit Gupta (11 times), P.M.Sayeed, Somnath Chatterjee and A.B. Bajpayee (10 times each). Giridhar Gamang, another popular leader of Congress party and ex CM of Odisha also holds the record of winning the neighbouring Koraput Lok Sabha constituency for 9 times. But it is not a continuous win. After winning the seat 8 times in a row, he left it for his wife in 1999, when he became the Chief Minister of the state. He came back to win the seat for the 9th time only in 2004.

Khagapati retired from active politics 20 years back and it is possible that his record could be overtaken some day. But it is far more important to note that this man chose to come back and settle down for a simple farmer’s life in his village after long 32 years in Delhi. A simple and contented life close to nature, like any other person of his Tribe.