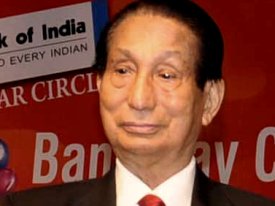 The BJP petitioned the Chief Electoral Officer alleging Jamir that he is campaigning for candidates who are contesting in the state assembly elections.

“The present Governor of Odisha SC Jamir is stationed in Mokokchung Town and campaigning in ensuing state assembly election 2018 for particular candidates of Indian National Congress (INC) and Nagaland Peoples Front (NPF). The Bharatiya Janata Party (BJP) Nagaland strongly protests his involvement in the electioneering process in Nagaland as he is supposed to maintain neutrality as per the Constitution of India,” the petition read.

“The Governor should uphold the integrity and respect of the Governor office for larger interest of India. Besides, election modal codes are already violated by Dr SC Jamir which is threatening the Indian democracy as well as protocol as head of the state,” it further added.

If he is so keen to enter state politics again, he should resign immediately. We urge the President of India to take action against him for committing constitutional impropriety and dereliction of duty, the BJP demanded.