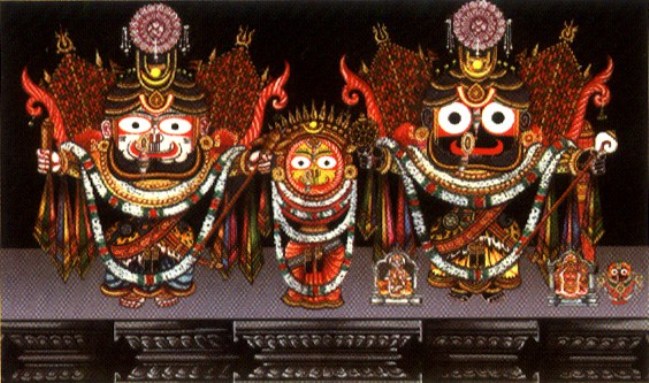 Bhubaneswar: After 26 years, the rare Nagarjuna Besha of Lord Jagannath and his divine siblings was held at Puri Srimandir with the deities taking the form of Naga warriors.

As per the ritual,  the deities were dressed with golden attire and adorned with 16 types of traditional weapons , including Trishul (trident),  Hala (plough), Chakra (wheel), Musala (mace), arrows and bows along with decorative helemts. For the first time, the grand ritual, which falls once in several years, was observed in the absence of devotees due to the COVID-19 pandemic.

As per the schedule, the Dwara Phita ritual was held at 2.45 AM today followed by Bhitara Sodha,  Mangala Alati, Mailam, Tadapalagi, Naga Besha and Abakasha Niti. All the rituals were completed  by 4,30 AM.

Odisha: SJTA says all items of deities of Srimandir in safe…

However, the Nagarjuna  Besha ritual, which was scheduled to begin at 4:45 AM, was delayed and began at 7 AM due to a dispute between servitors of Bhandar Mekap, Khuntia and Singhari.

Worth mentioning, the Nagarjuna Besha of Lord Jagannath is being held after 25 years. It was last observed back in November, 1994.

The ritual commemorates the killing of Sahashrajuna by lord Parsuram. The Besha also marks the battle between Arjuna and his son Nagarjuna. It is observed in the year when Panchuka (the last five days of the Holy month of Kartika) is observed for six days.