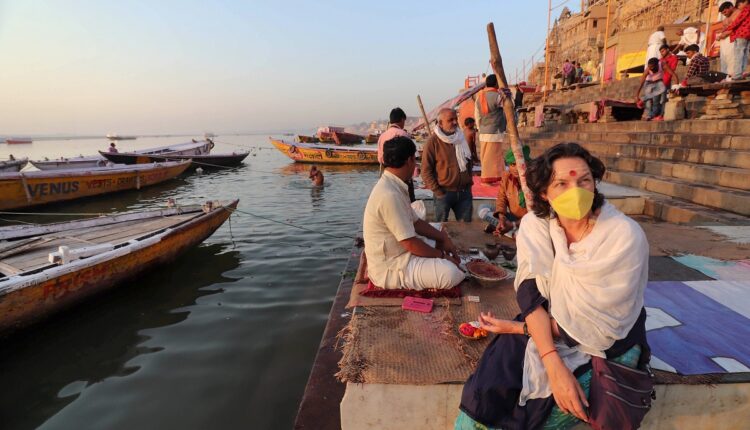 The great river Ganga that flows through the plains of the northern Indian subcontinent is known to be the holy river of Hinduism for its pious properties of washing away one’s sins. apart from its sanctimonious qualities, the river flows through 197 cities and towns while fending to a population of over 150,000 individuals. Despite its religious and sustainable corollaries, today Ganga is considered to be the sixth-most polluted river in the world. The pollution caused by untreated sewage, industrial waste, and religious activities poses a severe threat to about 40% of the Indian population that relies on the river.

The first time the river was viewed as “polluted” was back in the 1970s when over six hundred kilometres were already declared as ecologically dead zones. Since then several projects such as the Ganga Action Plan I, 1986 that used up about Rs 4,000 crores have been initiated to preserve the river but without effect. Consequently, the National Democratic Alliance under PM Modi launched the Namami Gange project six years ago with a promise of a clean Ganga by 2019. 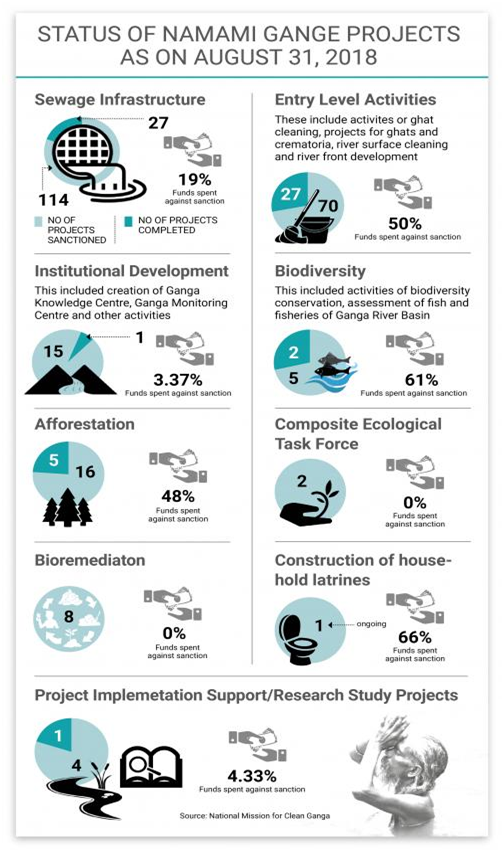 Namami Gange, implemented by the National Mission for Clean Ganga (NMCG), and headed by PM Modi, After consuming about 100 billion Rupees, has repeatedly come under the scanner of a parliamentary panel as well as the National Green Tribunal for the lag in the cleaning related work. The Central Pollution Control Board’s most recent data and environmentalists monitoring the river have debunked the claims of developments and have repeatedly been raising questions to the government.

Six years later and here’s why a clean Ganga remains a distant cry:

One of the most profound problems in the presence of untreated sewage in the river. Consequently, sewage treatment plants (STPs) have been at the centre of Ganga pollution abatement. STPs with a capacity of over 2,000 million litres a day (MLD) were to be rehabilitated as were the original standards of the plan. 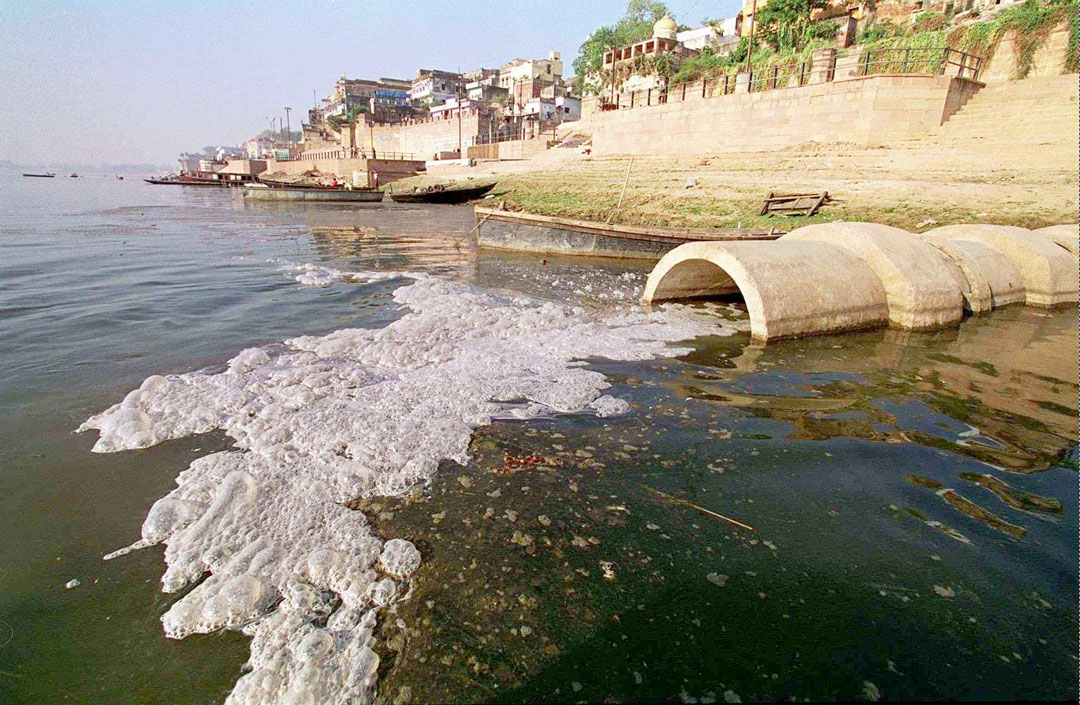 However, in March 2020, the Union Minister of State for Jal Shakti and Social Justice and Empowerment, Rattan Lal Kataria, told parliament that a total of 152 sewerage infrastructure projects have been sanctioned in eight states while 75 projects are under progress whereas, 31 projects are under various stages of tendering.

CAG reported that only 63% of the funds were utilized during 2014-15 to 2016-17 for the river clean-up program. The Clean Ganga Fund with a corpus of over Rs 198.14 crore, was a fund under which entities or a commoner could contribute to the river clean up. However, NMCG could not utilize any amount from the Fund due to the non-finalization of the action plan.

Another conflict regarding the cost overruns occurred due to the debatable cost of STPs. The government informed that new STPs were being constructed under the Hyper Annuity Model which the developer has to take care of the maintenance of the project for 15 years. The payment for the same is linked to the performance of the STPs or the water treated by it. However, when a detailed questionnaire seeking to know whether there were enough monitoring machines installed to check the quality of the water was sent to the Director-General, NMCG, Rajiv Ranjan Mishra, it went unanswered.

Additionally, the CAG report also slammed the NMCG for running advertisements in national newspapers about the project which lead to avoidable expenditure of Rs 2.46 crore.

While the government has declared the country, open-defecation free, various studies have cast apprehensions regarding the same. Improper faecal sludge management is an even bigger problem than sewage treatment.

Vishwambhar Nath Mishra, professor at the department of electronics at IIT-BHU, stated that the technology used in the STPs being developed will not be able to bring down the faecal coliform level in Ganga, hence rendering the process rather redundant.“It is because the high faecal coliform level is the root cause of all the waterborne diseases. Another point is that the plan was to intercept the drains falling into the rivers, treat the sewage and then use that water for agriculture, etc. However, some of the intercepted drains are falling into another drain which is then again coming to the river and in some cases, the partially treated drain water is again being dumped into the river,” Mishra told sources. 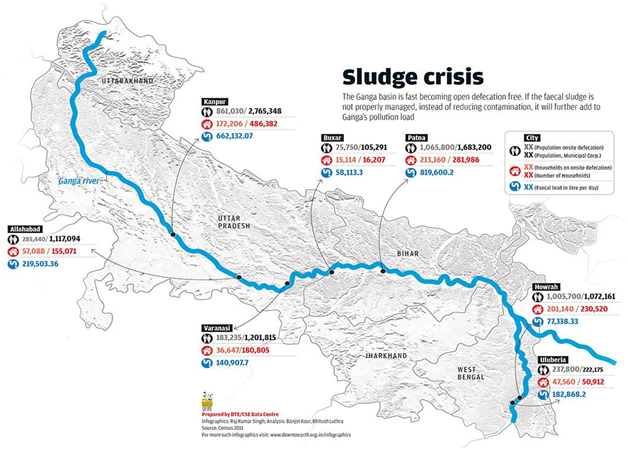 Call for an autonomous body

the project must ensure seamless coordination between the agencies responsible for carrying out different tasks. “The Ganga Action Plans lacked the coordination of ministries. It is still lacking in Namami Gange. If the departments do not coordinate well, the program will not achieve desired objectives,” Vinod Tare of IIT-Kanpur had stated.

Experts have time and again stressed the need to have an autonomous body to ensure the project’s utility. “It is immaterial whether you come up with a new law or not. What is required is an autonomous body for the rejuvenation of Ganga which is independent of the government when it comes to its functioning. Instead of bureaucrats, it should consist of experts well-versed with the river,” stated GD Agrawal, the 86-year-old former IIT-Kanpur professor who recently died after following a fast for 111 days in demand for a clean and free-flowing Ganga.

Political parties heading the project have been called out for exploiting the project for its political gains without making any progress under the same.

According to BD Tripathi, in-charge of Banaras Hindu University’s Ganga Research Centre revealed that if the flow in the river is maintained it can solve the problem of 60-80 per cent of organic pollutants. He further informed that Ganga has medicinal properties that can treat skin infections. These properties come due to medicinal plants on the path of Ganga. Chaining the river with and canal diversions block the natural minerals from the water. 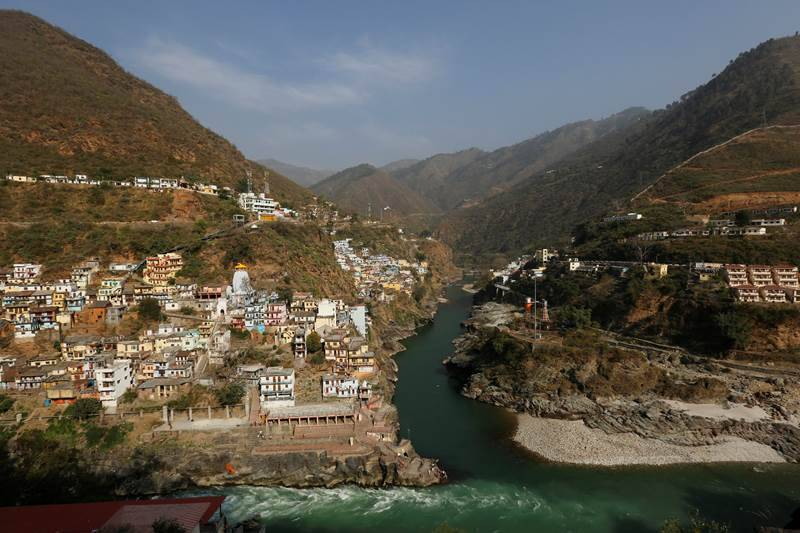 A K Gosain, professor at IIT-Delhi and a member of the panel that has drafted the Ganga protection law, has suggested the use of hydroelectric projects can reduce excessive consumption of water. “The designs of hydroelectric projects can be tweaked in such a manner that they consume less water. It may raise the cost of the projects but should be done for the long-term preservation of the Ganga. It is now for the government to decide whether it comes out with such a mandatory policy or not,” he said.

Six years after the launch of Namami Gange, cities along the river remain highly polluted while people might be consuming partially-treated sewage water. The government has extended the deadline but the possibility of achieving the target remains cloudy.