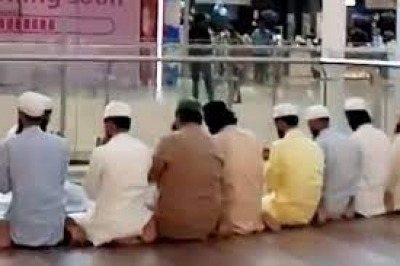 Lucknow: The newly opened Lulu Mall in Lucknow has landed in controversy within two days of its opening.

A viral video on social media that shows a group of people offering namaz in an open space in the shopping arena of the mall, has evoked a strong reaction from right-wing outfits.

The Akhil Bhartiya Hindu Mahasabha has issued a warning, saying that if namaz is offered again in the mall, it would hold a protest against it by reciting the ‘Hanuman Chalisa’.

In a statement issued in this regard, the organisation also asked the Hindu community to boycott the mall.

The Hindu outfit has further stated that since the opening of the mall, it has been allegedly said that ‘love jihad’ is promoted there. It noted that 80 per cent of the employees hired in the mall belonged to the Muslim community while the remaining 20 per cent are Hindu girls so that love jihad can be started.

The statement stated that the Yogi Adityanath-led Uttar Pradesh government has banned namaz or other religious activities in public places. Despite this, people offered namaz in Lulu Mall.

Chief Minister Yogi Adityanath had inaugurated the Lulu Mall in the state capital on July 10.

Located on the Amar Shaheed Path, Golf City, Lulu Mall houses some of the biggest brands in India. It includes several attractions including the mega LuLu Hypermarket and the family entertainment zone Funtura.

Spread over 2.2 million square feet, Lulu mall will also have a dedicated wedding shopping arena. It also houses 15 fine dining restaurants and cafes, and a massive food court with 25 brand outlets that have a capacity of seating 1,600 people.

With this launch, Lulu Group International now has five malls in the country. The others are in Kochi, Bengaluru, Thiruvananthapuram, and Thrissur.