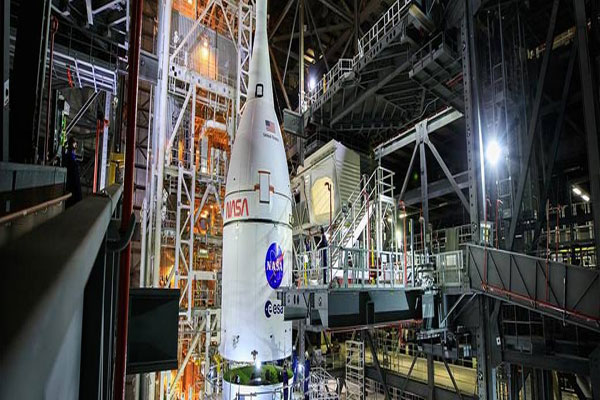 Washington: NASA has completed stacking of its mega-Moon rocket and spacecraft that will launch the next generation of deep space operations, including Artemis missions on and around the Moon, the agency said.

Engineers and technicians successfully secured the Orion spacecraft atop the fully assembled Space Launch System (SLS) rocket at the agency’s Kennedy Space Center in Florida just before midnight October 21, the US space agency said in a statement.

The stack now stands 322 feet tall inside the Vehicle Assembly Building (VAB) at NASA Kennedy. With stacking complete, a series of integrated tests now sit between the mega-Moon rocket and targeted liftoff for deep space in February 2022, the agency said.

“With the stacking and integration of NASA’s Space Launch System rocket and Orion spacecraft complete, we’re getting closer and closer to embarking on a new era of human deep space exploration,” said NASA Administrator Bill Nelson, in the statement.

“Thanks to the team’s hard work designing, manufacturing, testing, and now completing assembly of NASA’s new rocket and spacecraft, we’re in the home stretch of preparations for the first launch on the Artemis I mission, paving the way to explore the Moon, Mars, and beyond for many years to come,” he added.

The mission, known as Artemis I, will pave the way for a future flight test with crew before NASA establishes a regular cadence of more complex missions with astronauts on and around the Moon under Artemis.

Through Artemis missions, NASA will land the first woman and the first person of colour on the surface of the Moon, paving the way for a long-term lunar presence and serving as a stepping stone on the way to Mars.

Each of the test campaigns will evaluate the rocket and spacecraft as an integrated system for the first time, building upon each other and culminating in a simulation at the pad to prepare for launch day.

Once the systems are verified, the 322-foot-tall rocket will roll back into the VAB for final inspections and checkouts, including the second part of the flight termination system test, ahead of returning to the pad for launch.

The first in a series of increasingly complex missions, Artemis I will provide a foundation for human deep space exploration and demonstrate our commitment and capability to extend human existence to the Moon and beyond prior to the first flight with crew on Artemis II.