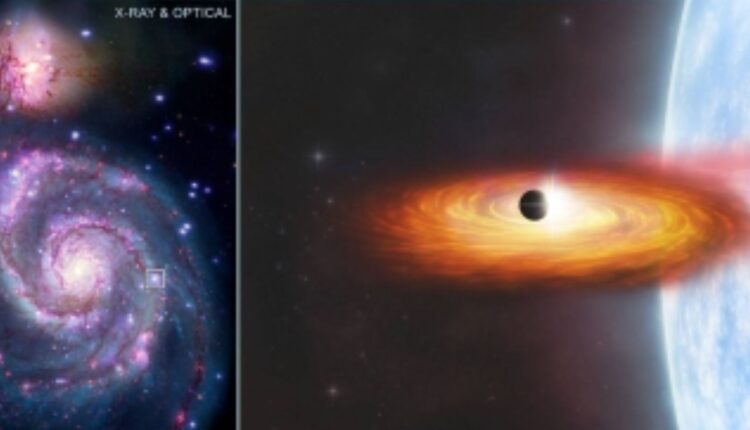 Washington: NASA’s Chandra X-ray Observatory has for the first time spotted signs of a planet transiting a star outside of the Milky Way galaxy, opening up a new avenue to search for exoplanets at greater distances than ever before.

The possible exoplanet — or planets outside of our Solar System — candidate is located in the spiral galaxy Messier 51 (M51), also called the Whirlpool Galaxy because of its distinctive profile, NASA said in a statement.

Astronomers have, so far, found all other known exoplanets and exoplanet candidates in the Milky Way galaxy, almost all of them less than about 3,000 light years from Earth.

An exoplanet in M51 would be about 28 million light years away, meaning it would be thousands of times farther away than those in the Milky Way, NASA said.

“We are trying to open up a whole new arena for finding other worlds by searching for planet candidates at X-ray wavelengths, a strategy that makes it possible to discover them in other galaxies,” said Rosanne Di Stefano of the Center for Astrophysics at Harvard and Smithsonian (CfA) in Cambridge, Massachusetts, who led the study.

The findings are published in the journal Nature Astronomy.

The exoplanet candidate was spotted in a binary system called M51-ULS-1, located in M51. This binary system contains a black hole or neutron star orbiting a companion star with a mass about 20 times that of the Sun. The X-ray transit they found using Chandra data lasted about three hours, during which the X-ray emission decreased to zero.

Based on this and other information, the team estimate the exoplanet candidate in M51-ULS-1 would be roughly the size of Saturn, and orbit the neutron star or black hole at about twice the distance of Saturn from the Sun.

However, more data would be needed to verify the interpretation as an extragalactic exoplanet. One challenge is that the planet candidate’s large orbit means it would not cross in front of its binary partner again for about 70 years, thwarting any attempts for a confirming observation for decades, NASA said.

Named in honor of the late Indian-American Nobel laureate, Subrahmanyan Chandrasekhar, the Chandra X-ray Observatory is the world’s most powerful X-ray telescope. It has eight-times greater resolution and is able to detect sources more than 20-times fainter than any previous X-ray telescope.

Known to the world as Chandra (which means “moon” or “luminous” in Sanskrit), Chandrasekhar was widely regarded as one of the foremost astrophysicists of the twentieth century.