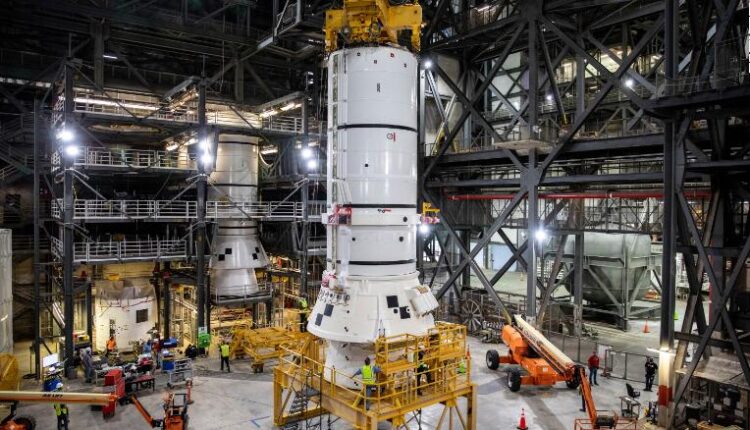 NASA engineers have started accumulating the massive rocket which is designed to take the first woman to the moon as a section of the Artemis program. A total of 10 segments will produce the twin solid rocket boosters before its first liftoff and is expected to take place mostly in 2021.

From the officials of NASA, earlier this week the first booster segment of the Space Launch System (SLS) was heaped on top of the mobile launcher at NASA’s Kennedy Space Center in Florida in preparation for its maiden flight.

It is expected that the first woman and next man will be sent to the moon by 2024 and the rocket plays a vital part in NASA’s Artemis lunar exploration program. NASA officials also expect the SLS will be utilized to reach Mars and other “Deep space destinations.” With two test flights around the moon with the astronauts, NASA’s Artemis I mission is expected to launch in 2021.

The officials of NASA stated that the SLS rocket will stand taller than the Statue of Liberty and have about 15% more thrust at liftoff than the Saturn V rockets that powered the Apollo missions about 50 years ago, making it the most powerful rocket ever built. However, the project has been determined by setbacks and over cost.

NASA, European Space Agency to collaborate on Artemis Gateway lunar outpost. Andrew Shroble, an integrated operations flow manager with Jacobs, a company working with NASA on the Artemis program said- “Stacking the first piece of the SLS rocket on the mobile launcher marks a major milestone for the Artemis Program.”

As of now right nations have already signed NASA’s Artemis Accords that guide joint exploration of the moon.