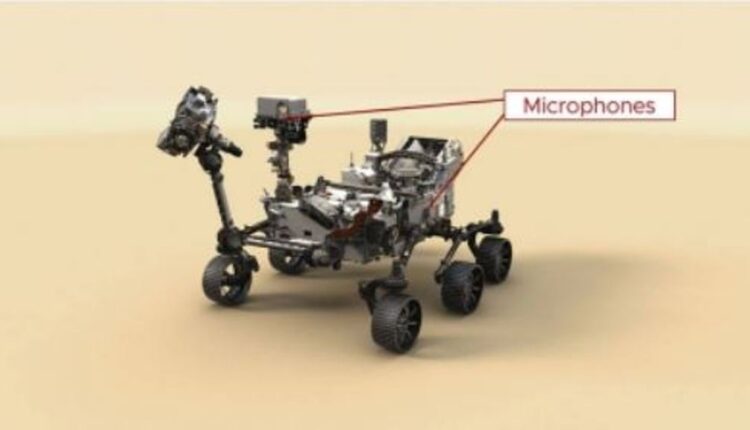 These sounds allow scientists and engineers to experience the Red Planet in new ways, NASA said.

“It’s like you’re really standing there,” said Baptiste Chide, a planetary scientist who studies data from the microphones at L’Institut de Recherche en Astrophysique et Planetologie in France, in a statement.

“Martian sounds have strong bass vibrations, so when you put on headphones, you can really feel it. I think microphones will be an important asset to future Mars and solar system science,” he added.

NASA’s Perseverance Mars rover carries two microphones which are directly recording sounds on the Red Planet, including the Ingenuity helicopter and the rover itself at work.

It is the first spacecraft to record the sound of the Red Planet using dedicated microphones — both of which were commercially available, off-the-shelf devices. One rides on the side of the rover’s chassis. The second mic sits on Perseverance’s mast as a complement to the SuperCam laser instrument’s investigations of rocks and the atmosphere.

The body mic was provided by NASA’s Jet Propulsion Laboratory in Southern California, while the SuperCam instrument and its microphone were provided by the Los Alamos National Laboratory (LANL) in New Mexico and a consortium of French research laboratories under the auspices of the Centre National d’Etudes Spatiales (CNES).

The rover’s chassis mic is well-positioned to listen to its wheels and other internal systems.

SuperCam studies rocks and soil by zapping them with a laser, then analysing the resulting vapour with a camera. Because the laser pulses up to hundreds of times per target, opportunities to capture the sound of those zaps quickly add up: the microphone has already recorded more than 25,000 laser shots.

Some of those recordings are teaching scientists about changes in the planet’s atmosphere.

An audio dimension can also aid in spacecraft maintenance. Engineers use cameras to monitor the wheel wear on Curiosity rover and dust accumulating on InSight’s solar panels. With microphones, they could also check a spacecraft’s performance the way mechanics might listen to a car engine, NASA said.

The Perseverance team is amassing loads of recordings from the rover’s chassis mic, which is well-positioned to listen to its wheels and other internal systems. While there aren’t enough recordings yet to detect any changes, over time, engineers may be able to pore over that data and discern subtle differences, like additional electric current going to a particular wheel. This would add to the ways they already monitor the spacecraft’s health.