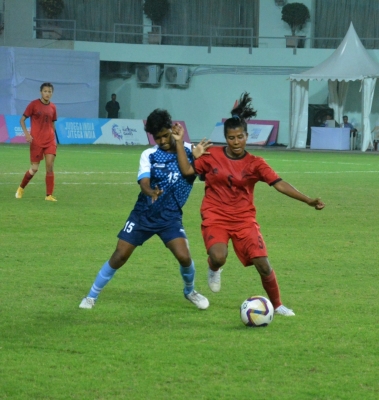 Ahmedabad: Manipur duly retained their National Games women’s football crown by beating Odisha 2-0 in the final at the Eka Arena Transstadia under floodlights here on Monday. Both goals came in the first half.

It was a facile and expected win for the North Eastern state who have been dominating the National championships in recent years.

Coached by the legendary midfielder Oinam Bembem Devi and led by ace India forward Ngangom Bala Devi, Manipur established an early stranglehold over the proceedings. Bala Devi was the fulcrum of Manipur’s attacking moves as she tried to set up the offensive action with her experience.

It was mostly one-way traffic toward the Odisha goal with the four Manipur forwards peppering the rival target with a series of tries. Rival custodian Spandita Das confidently dealt with the regulation shots while some sailed over the crossbar or flew outside the posts. Manipur could also not capitalise on the succession of flag kicks they earned.

Attired in all red, the champions got their breakthrough in the 10th minute when Bala Devi, who tried to get herself into scoring positions with her twists and turns, found the mark with a shot from inside the box that brooked no stopping from Spandita Das.

International midfielder N. Ratanbala Devi, who turns out for Gokulam Kerala in the Indian Women’s League, doubled the lead in the 36th minute when she bulged the net with a stiff grounder from a distance, the organisers informed in a release on Monday.

Coached by former Mohun Bagan player Crispin Chettri, Odisha showed greater resolve and cohesion in the second half and manages some long-rangers. They earned a few corners which they could not turn to account. Though captain and central defender Manisa Panna tried to rally her troops, Odisha lacked a special player who could make a difference on the pitch

Late in the game, however, the Odisha attack sprang alive. Pyari Xaxa and substitute Satyabati Khadia forced Manipuri goalkeeper ML Devi to taste some action. She was equal to the task. Manipur then successfully ran down the clock to take the title back home.