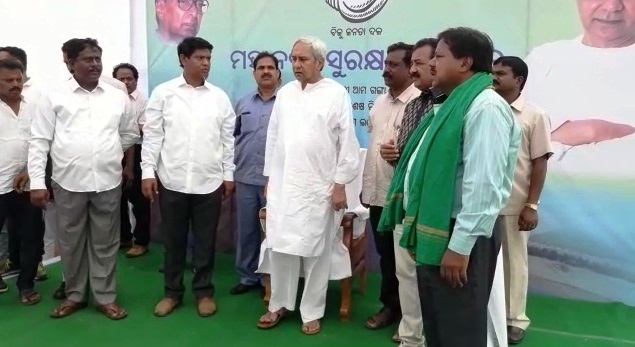 The second phase of the campaign, launched on both sides of the river from Ambavona and Lakhanpur in Bargarh and Jharsuguda districts respectively, is scheduled to cover a distance of 1585 kms passing through 15 districts and 45 constituencies and culminate at Paradip in Jagatsinghpur district.

“Mahanadi is the lifeline of Odisha. The ‘attitude’ of BJP governments at Centre and Chhattisgarh over the Mahanadi matter is against Odisha. The BJP leaders of Odisha are supporting Chhattisgarh in the issue while shedding crocodile tears. If they are concerned about the welfare of Odisha and its people, they should oppose the Chhattisgarh government,” Patnaik said while addressing a gathering at Sukhasoda.

“The BJD-government had moved the Supreme Court for the rights of Odisha, as a result of which Mahanadi tribunal has been constituted. The Mahanadi is drying in Odisha due to construction of barrages by Chhattisgarh. The water-level at Hirakud dam is also decreasing,” the BJD chief said.

“Construction of barrages will result in availability of water near the barrages but scarcity along 500-km stretch of Mahanadi. There will be lack of water for cultivation of Rabi crops. The fishermen will also face losses. People are now well aware of the double standards of those who are supporting construction of barrages,” he said.

“We will not let Mahanadi to dry. The fight for Mahanadi is not only of the BJD, but also of the people of the state. This fight is for betterment of our future generations,” he concluded.

According to party sources, public meetings, street corner plays, jal aartis, motorcycle rallies etc will be organised during the yatra to sharpen public opinion in Odisha against the conspiracy of the BJP governments at Chhattisgarh and Centre to dry Mahanadi.

Besides, handbills and booklets on the Mahanadi would be distributed among people during the campaign.

On the other hand, the state BJP said the BJD is trying to make the Mahanadi dispute an issue in ensuing Assembly elections.

“When a tribunal has already been formed, there is no point in holding an agitation. The BJD is trying to make it an issue ahead of the polls,” said BJP Spokesperson Golak Mohapatra.

Worth mentioning, the state government and the BJD have been opposing construction of barrages upstream of Mahanadi by Chhattisgarh government, thereby checking the flow of water downstream.

Both Chhattisgarh and Odisha governments are at loggerheads over sharing of Mahanadi river water. Odisha moved the Supreme Court accusing Chhattisgarh of constructing barrages unilaterally while the Central government has set up a tribunal to resolve the dispute.