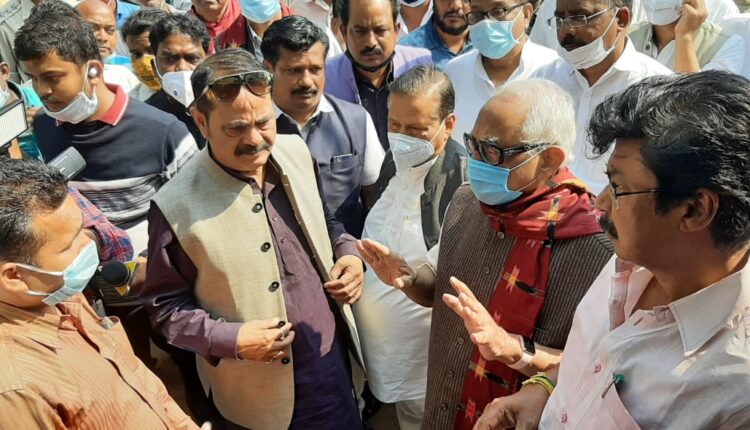 Nayagarh: Amidst the political heat over alleged murder of a minor girl in Nayagarh district, the opposition parties of the State today visited the district to meet family members of the deceased.

The deceased’s father Ashok Sahoo informed the team about police inaction in the murder case. As the Orissa High Court had recently expressed displeasure over probe by the Nayagarh Police into the case, the party demanded resignation of the Chief Minister Naveen Patnaik on moral ground as he is the head of the Home Department in Odisha.

Besides, the party expressed dissatisfaction over the process of investigation of the SIT into the case.

Meanwhile, a team of BJP members led by the party’s national spokesperson Sambit Patra met the family of deceased girl. The leaders discussed the matter with parents Ashok Sahoo and Saudamini Sahoo.

They demanded CBI probe into the case as well as resignation of Higher Education Minister Arun Sahoo alleging his involvement in murder.

The case had come to light after deceased girl’s father Ashok Sahoo and mother Saudamini on November 24 had attempted self-immolation outside Odisha Assembly demanding justice for their daughter.

Alleging police inaction in the case, the couple had accused minister Arun Sahoo of shielding a person identified as Babuli Nayak, the prime suspect in the case.

According to reports, the 5-year-old girl had gone missing while playing in front of her house on July 14. After 10 days, i.e on July 23, her decomposed body packed in a gunny bag was found behind the house near a pond. Her parents alleged that Nayak had kidnapped and killed her.

Following demand of the opposition for a fair probe, the State Government formed a Special Investigation Team (SIT) led by the IPS officer Arun Bothra for investigation into the case.