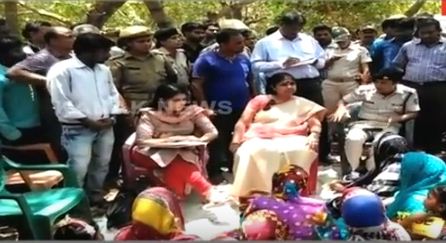 Accompanied by panel’s another member Gitarathy Singh, Sushma visited Kalikuda village under Erasama police limits and collected detailed report about the resentment meted out to Parbati by BJD supporters for handing over a letter to Prime Minister Narendra Modi during road show on BJP National Executive Meeting day in Bhubaneswar on April 15.

The panel members discussed the key issues — police inaction and FIR that was not lodged with Tirtol police station by SP after she was attacked by BJD goons for submitting the letter to PM in Odisha capital.

Sushma promised the victim to give her justice. The panel assured to launch a high level probe into the matter. The team also met Odisha DGP KB Singh this evening regarding the issue.

Notably, Odisha BJP has been politicising the issue alleging the degradation of law and order system during BJD government in the state. Recently, a delegation led by Union Petroleum & Natural Gas Minister and comprising of party’s national spokesperson Sambit Patra had met Union Home Minister Rajnath Singh to raise the issue. They handed over a memorandum demanding protection to Erasama victim.

Parbati was allegedly attacked by few BJD goons for voting BJP in the recently held panchayat polls in Odisha. After failing to get protection from police, she had rushed Bhubaneswar to express her grievance through a letter to PM Modi during road show. However, she was again targeted by the BJD supporters for approaching the PM.