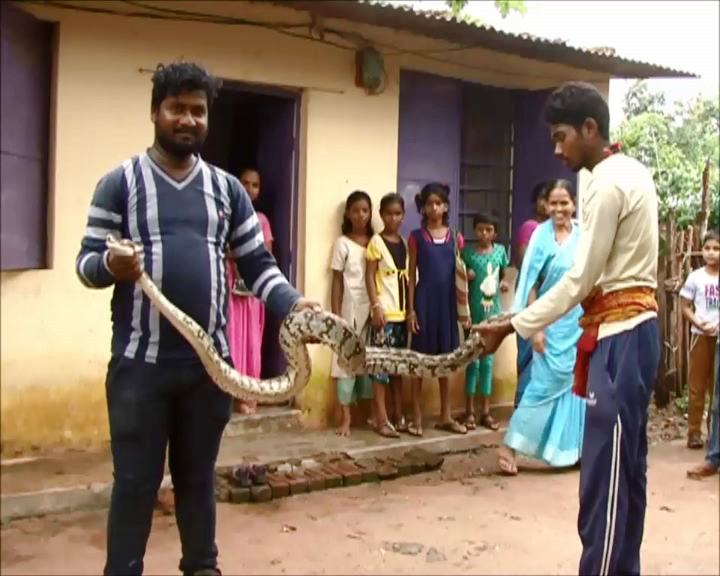 Members of a local snake helpline rescued a serpent from a residential area in Odisha’s Malkangiri.

According to reports, a huge snake was spotted by residents of DRDA colony here last night following which the panicked dwellers informed the snake helpline for help.

A team of helpline members headed by Tapan Sethi reached the spot and rescued the snake said to be a rare species of Burmese python (Python bivittatus).

According to the rescue team, the python is around 7.5 feet long and weighs 15 kg.

“The rescued python is 7.5 feet long and weighs 15 kg. We had informed the Forest Department officials with the help of which the snake was released to the wild,” Tapan Sethi, snake helpline member said.

According to sources, the python was released to a nearby forest this morning.

“The forest cover in the nearby region is depleting as a result of which the snakes and other wild animals are transgressing into the residential areas. A couple of days ago, a dead bear was found near a temple. We are creating awareness and urging people to inform Forest officials and not to hurt the wild animals. It is unfortunate that some people are attacking them out of fear,” Bhaskar Behera, Forest Department official said.

Notably, a python was rescued from Samabayguda colony here three days ago. The python was 8 feet long and about 20 kg.

It may be mentioned that around 12-14 pythons have been rescued from the town and its adjoining areas in less than a month’s time.

The forest officials attribute the reason behind snakes turning towards human habitation to the fast receding forest cover.

No plastic flag, no disrespect to tricolour, says home ministry