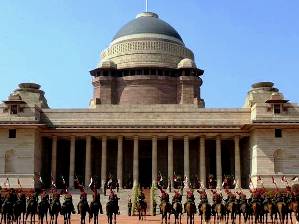 The Narendra Modi government – like any other new dispensation – is offloading the bureaucrats who had served under the Congress led UPA-II and has reportedly asked some governors and other political appointees occupying constitutional positions to step down. Shunting out babudom is not a problem as their positing is at the discretion of the government but a problem has arisen as eight governors are resisting calls to voluntarily quit.

While two Governors – B.L.Joshi of Uttar Pradesh and Shekhar Dutt of Chhattisgarh – have resigned, others are resisting the pressure to voluntarily step down. Politically speaking, it has been a practice in India for the ruling party to rest the political left-outs or political baggage at the Raj Bhawans.

On the 41st day after becoming the prime minister on May 22, 2004, Manmohan Singh shunted out four Governors appointed by the predecessor government. They were removed for their political affiliation with the BJP and Article 156 of the constitution was cited remove all the four in one stroke. Article 156 that spells the term of the office of the Governor. Clause (1) of the Article 156 says that a governor shall hold office at the pleasure of the president.

What prevents Modi government from doing what was done by the Congress-led UPA. After all political retribution is integral to real politic.

Soon after the governors were removed, a PIL was moved in the Supreme Court which was heard by the constitution bench.

The five-judge bench on May 7, 2010 said that a with the change of gvernment at the Centre a Governor could not be removed merely because he is not on the same political or ideological page as that of the government. The court further held that though for removing a governor no reasons had to assigned, this could not be “irrelevant,
arbitrary, whimsical, or malafide”. If this was so, court would step.

The constitution bench said, “A Governor cannot be removed on the ground that he is out of sync with the policies and ideologies of the Union Government or the party in power at the Centre. Nor can he be removed on the ground that the Union Government has lost confidence in him. It follows therefore that change in government at Centre is not a ground for removal of Governors holding office to make way for others favoured by the new government.”

The court further held: “As there is no need to assign reasons, any removal as a consequence of withdrawal of the pleasure will be assumed to be valid and will be open to only a limited judicial review. If the aggrieved person is able to demonstrate prima facie that his removal was either arbitrary, malafide, capricious or whimsical, the court will call upon the Union Government to disclose to the court, the material upon which the President had taken the decision to withdraw the pleasure.”

“If the Union Government does not disclose any reason, or if the reasons disclosed are found to be irrelevant, arbitrary, whimsical, or malafide, the court will interfere”, the constitution bench had said.

The second is that government will have to persuade President Pranab Mukherjee that its reasons for seeking the withdrawal of pleasure was not “irrelevant, arbitrary, whimsical, or malafide” – an uphill task as Mukharjee is prone to take an independent call.

The question of a governor was also considered by Justice R.S.Sarkaria that went into Union-States relations. Justice Sarkaria in his report recommended that “the Governors tenure of office of five years in a State should not be disturbed except very rarely and that too for some extremely compelling reason. It is indeed very necessary to assure a measure of security of tenure to the Governor’s office.”

The National Commission to Review the Working of the Constitution headed by Chief Justice M.N. Venkatachaliah that went into the working of Indian constitution recommended its amendment so that a governor’s appointment should be entrusted to a committee comprising the prime minister, the home minister, the speaker of the Lok Sabha and the chief minister of the concerned state.

Favouring a fixed tern for the governor, the Commission recommended the deletion of Article 165(1) that says that the Governor holds office “during the pleasure of the president”.

As usual, political exigencies weighed upon the recommendations that would have gone a long way in strengthening the institution of governor,
Our political class has often demonstrated that it has no qualms in allowing their immediate interests from overshadowing the democratic institutions – so vitial for the democratic functioning of the state.

Thus, it may be necessary to once again visit the recommendations of the Justice
Sarkaria report and the Justice Venkatachaliah report so that there could be an institutional framework for the appointment of a governor with a fixed tenure.
……………………………………………….
*Parmod Kumar is the IANS legal correspondent. The views expressed are personal. He can be contacted at [email protected]