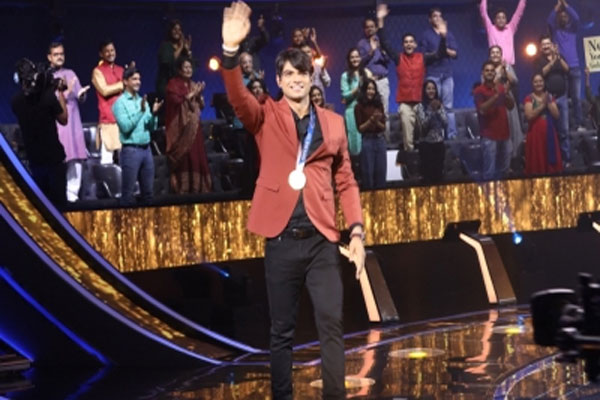 Mumbai: Olympic gold medalist Neeraj Chopra, who will be on the hot seat in ‘Kaun Banega Crorepati 13’ for the ‘Shaandaar Shukravaar’ episode on Friday, will be seen sharing his story as to why and how he took up Javelin throw as a sport.

He says: “Honestly, I was overweight when I was 13-14 years old. My chachaji (paternal uncle) insisted that I take up sports. He even asked me to choose between sports and studies, and thinking he will be proud of me I told him my choice — studies.

“To which he said he knows how much I study and asked me to take up sports. So, when he sent me to a stadium, I wasn’t even sure I would take up any sport.”

“I simply went there to lose weight. The stadium was 15-16 kilometre away from my village and I used to travel by bus. This bus used to stop 2km ahead of the stadium and I had to walk the rest of the way. After a month or two, my fitness improved.

“There were a lot of sports at the stadium but I saw my seniors throwing javelin and I liked seeing it go very far and get stuck in the ground and I felt like I wanted to do the same. I tried it and enjoyed it very much,” adds Neeraj who holds the second spot on the World Athletics Ranking in 2021.

He said: “My senior Jai, he felt that my throw was good and he asked me to join him. And I don’t know what happened or what I liked about it, but I felt this is a sport that I want to take up.

“I never thought of representing India at the Olympics when I took up the sport. I just put in all my energy and hard work and I’m lucky that I got great support and guidance from my family and seniors and today, I’ve won Gold for my country.”

Olympians PR Sreejesh and Neeraj Chopra will be special guests for the ‘Shaandaar Shukravaar’ episode of KBC 13′ which will air on September 17 on Sony Entertainment Television.