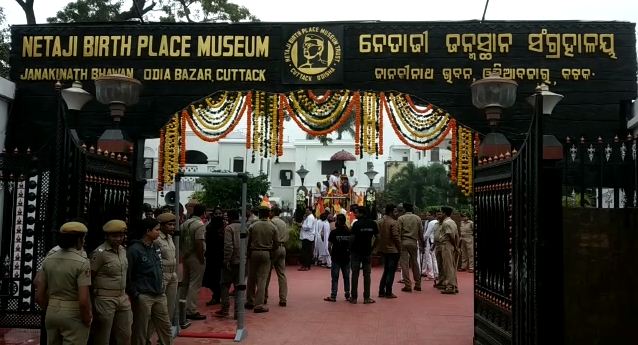 Bhubaneswar: Born and brought up in Odisha’s Cuttack, Netaji Subhas Chandra Bose is a pride of our history. His association with the oldest town and the then capital of Odisha is clearly evident with him reminiscing about his days at Ravenshaw Collegiate School in his unfinished autobiography, ‘an Indian Pilgrim’.

Bose writes, “Though at that time a comparatively small town with a population of 20,000, Cuttack had an importance of its own owing to a variety of factors. It had an unbroken tradition since the days of the early Hindu kings of Kalinga. It was de facto capital of Orissa which could boast of such a famous place of pilgrimage as Puri and glorious art relics as those of Konarka, Bhubaneswar and Khandagiri-Udayagiri. It was the headquarters not only for the British administration in Orissa, but also for the numerous ruling chiefs in that province. Although Cuttack afforded a healthy environment for the growing child, it had some of the virtues of both city and country life.”

He was born on January 23, 1897 to Prabhavati Devi and Janakinath Bose, who had migrated to Cuttack in 1880s and established himself there as a lawyer. They stayed at Odia Bazar and their home has now been converted into a museum.

“In 1902, he joined Protestant European School and then in 1909, he shifted to the Ravenshaw Collegiate School where he completed his matriculation. The headmaster, Beni Madhav Das, was pleased to see the brilliance of Bose. Beni Madhav had a great impact on young Bose. He has, in fact, mentioned in his autobiography, ‘I secretly said to myself that if I wanted an ideal for my life it should be to emulate him’. In 1913, Bose shifted to Calcutta and studied at Presidency College. Janakinath Bose stayed in Cuttack though, so Bose would visit Odisha frequently,” said retired History professor Ashok Patnaik.

Bose left for Calcutta (Kolkata) but always had a deep affection for Odisha. Even after being away from the state, he was part of all the awakening and protests for the Odia identity. In a meeting of ‘Prabasi Odia Sabha’, an organization formed to unite all Odia workers and labourers in Calcutta and led by Gopabandhu Das, on August 15, 1924, Bose gave a speech in Odia expressing his love for Odisha and appreciation for Das.

“On August 5, 1939, Bose visited Odisha and addressed a meeting at Ravenshaw College and later in the evening, joined the youths’ conference held within the Cuttack Municipal compound,” Ashok said.

He had addressed this meeting after deciding to form a new group within the Congress, ‘Forward Bloc’, that aimed at rallying all radical and anti-imperialist progressive elements in the country. He announced this decision as a Indian National Congress Committee president, on May 3, 1939. While leaders like Harekrushna Mahtab and Biswanath Das asked Bose to give up this rebel stance, Pandit Nilakantha Das and his son Ashoka supported him through and through.

“When he formed his own army, the Indian National Army (INA) or the Azad Hind Fauj, people from Odisha’s Ganjam and Puri were a part of it. Among 100 Indian civilians detained in Burma, 55 Odia soldiers of the INA were imprisoned in Central Jail of Rangoon,” Ashok added.