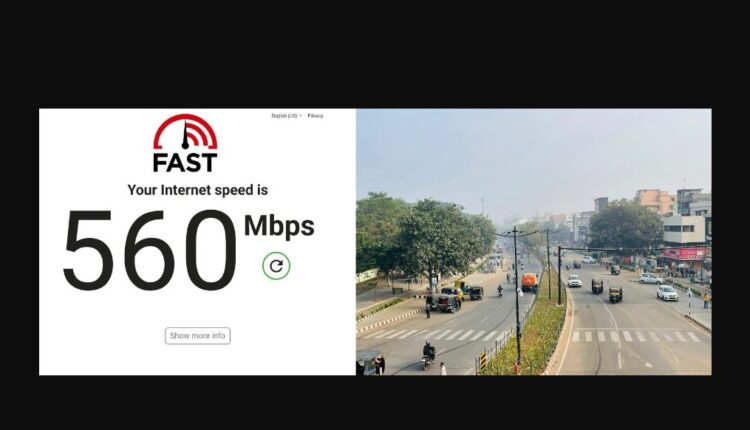 Bhubaneswar: While 5G is yet to be launched in Odisha officially, several netizens have reported super fast internet service with ‘5G network’ in their mobile phones in the capital city.

Taking to Twitter, they posted screenshots of the internet speed tests. An user experienced blazing fast internet with speed as high as 560 Mbps.

Airtel users have reportedly been availing the ‘5G network’ in Master Canteen, Infocity, Kalinga Stadium and Chandrasekharpur areas of the city.

Its crazy lightning speed. @airtelindia launched #Airtel5GPlus in selected places in #Bhubaneswar. Hopefully #5G will be helpful to make our life better with a better user experience. Have you experienced it yet in Bhubaneswar?@Airtel_Presence pic.twitter.com/NOTvOvZBKe

Hello @airtelindia @Airtel_Presence have you started rolling out 5G in @Bhubaneswar?? pic.twitter.com/dyfEpfKt67

We are getting 5G signal on Airtel in Bhubaneswar City. @AshwiniVaishnaw Sir , @airtelindia and @reliancejio when will it be officially launched in Bhubaneswar? We are eagerly waiting for the official announcement. #airtel5g #DigitalIndia pic.twitter.com/nEIXiENfdc

Today I’m experiencing 5G Airtel Postpaid in #Bhubaneswar. Thanks to @airtelindia for this. Superb speed up to 160MBPS. @discoverbbsr @BBSRBuzz pic.twitter.com/YNNwAcXLUL

However, Airtel was yet to make any official announcement in this regard.

Notably, Communications Minister Ashwini Vaishnaw while attending the Odisha Nirman Conclave-2022 organised by Kanak News here last month had said that equipment required for 5G network are already in place in Odisha and it will be launched within 2-3 months.