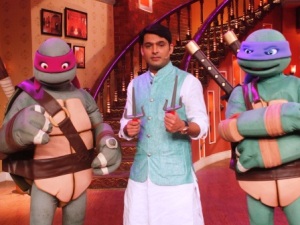 The Mumbai police have booked comedian Kapil Sharma — who had recently complained to Prime Minister Narendra Modi about graft — for alleged violations of environment laws, police said here on Monday.

Spokesperson DCP Ashok Dudhe told IANS that following a complaint by the Andheri Tehsil Office, a first information report has been lodged against Kapil under provisions of the Environment Act by the Versova Police Station.

The actor had purchased Bungalow No.71 in MHADA Colony in the posh Four Bungalows area of Andheri west from one Baran Adaersh on November 7, last year.

Kapil had dumped the debris of the repair works in the mangroves behind his bungalow and is also accused of making illegal new constructions near the mangroves.

After conducting a survey, the talathi (revenue department officer) of Andheri Tehsil also submitted his report to the Mangroves Cell and the police after which the actor has been booked.

“We have recorded complaint against the actor under Sp. LAC No.87/16 under section 15(1)(2) of the Environment Act,” Dudhe added.

This is the second FIR against the actor lodged by a different police station since his controversial tweet.

On September 12, Kapil and his neighbour, actor Irrfan Khan, were booked by the Oshiwara Police Station, following a complaint made by Brihan Mumbai Municipal Corporation under the Maharashtra Regional Town Planning Act Sec.53(7), for allegedly making some unauthorised constructions at their flats in suburban Goregaon west.

The actions against Kapil followed his tweets to the PM on September 9 in which he alleged that he was forced to pay a bribe of Rs five lakh for permission to speed up his office renovation works.

“I am paying Rs 15 crore income tax from last five years and still I have to pay Rs 5 lakh bribe to BMC office (every year) for making my office. Is this your ‘Achhe Din’,” Kapil asked in a tweet to Modi.

Stung by the 35-year-old popular comedian’s allegation, Maharashtra Chief Minister Devendra Fadnavis immediately called for “strictest action” and asked him to provide all information regarding the bribery allegation.

“We will not spare the culprits,” Fadnavis had said.

But within hours, accusing fingers were pointed at Kapil with various parties, including the BJP, Shiv Sena and Maharashtra Navnirman Sena, baying for his blood and demanding an unconditional apology.

By late evening, he had virtually retracted his morning allegations with a tweet: “I just voiced my concern on the corruption I faced with certain individuals. It is no blame on any political party — be in BJP, MNS or Shiv Sena. (IANS)

CBI to bring Ponzi firm directors on remand to Odisha