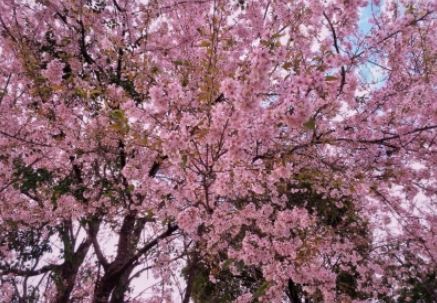 Imphal: The scientists from Manipur have found a new plant species of “Cherry Blossom” and as a mark of respect and for the outstanding contributions of scientist Dr Dinabandhu Sahoo, they named the new plant species as “Prunus dinabandhuana”.

The Cherry Blossom or “Sakura” is the national flower of Japan, which is also a source of inspiration for the Japanese people, and India became the 28th country in the world had earlier been included in the Sakura Map.

For Sahoo’s over eight years long determined efforts, the “Cherry Blossom” is now available in six of the eight northeastern states, excluding Assam and Tripura.

In November 2016, Dr Sahoo, a professor at the Department of Botany under the University of Delhi (DU) planned and organised India’s first “Cherry Blossom Festival” in Shillong which attracted lakhs of people and subsequently it became an international event for the past six years.

As a mark of respect and for the outstanding contributions of Sahoo, they named the new plant species as ‘Prunus dinabandhuana’ (Family Rosaceae) in his first name.

The plants grow up to 25-30 meters in dense mixed evergreen forest and unlike Japanese Cherry Blossom which blooms during March-April, this new species bloom in November, Zhimo said.

He said that their new findings were recently published in the latest issue of a reputed International scientific journal Annales Botanici Fennici, Helsinki, Finland.

While talking to IANS over phone, Sahoo said that Cherry Blossom, popularly known as Sakura in Japanese, is a symbol of peace and tranquillity.

He said that the Cherry Blossom festivals attract millions of tourists from across the world to Japan and the US during March-April generating millions of dollars in revenues.

But the situation changed a few years ago as India became a new destination for Cherry Blossom festival, the scientist pointed out.

In 2014, Sahoo, currently a Director of Centre for Himalayan Studies and Director, Cluster Innovation Centre and Senior Professor of Department of Botany of DU, while visiting Shillong spotted a Cherry Blossom tree in full bloom in the city. He then thought of launching a “Cherry Blossom Festival” in India.

In the same year 2014, Sahoo was appointed as the Director of the IBSD, a national institute, and immediately after his joining, he started exploring the deep forests of northeastern states for the presence of Cherry Blossom.

Sahoo, who was the first Indian student to visit Antarctica in 1987, said that he found that Cherry Blossom is native to the Himalayas.

“In 2015, I planned the Mission Pink Revolution or Mission Cherry Blossom for India. Thousands of Cherry Blossom saplings were planted in Shillong and Manipur in the early 2015 in collaboration with the state governments,” he said.

The scientist said that subsequently the Japanese showed keen interests and a delegation of GIFFU Cherry Blossom Association of Japan landed in India and jointly organised India’s first Sakura ceremony in early 2016, making India as the 28th country in the world to be part of the Sakura plantations.

“The Cherry Blossom and related festivals not only boost tourism in the northeastern states, but also can be a source of livelihood for thousands of local people,” Sahoo pointed out.

Due to his sustained efforts, the first Manipur Cherry Blossom festival was held in 2017 at Mao, the border town of Manipur and Nagaland where not only all the council of ministers turned up but also thousands of people participated.

Assistant Director of the Centre for Himalayan Studies in DU said that Sahoo, a former Vice-Chancellor of Fakir Mohan University in Odisha, initiated large scale cherry tree plantations in different states of northeast India and started major research projects in the region.

The first edition of Shillong Literary Festival, which is also a part of the Cherry Blossom Festival, was also held on the occasion.