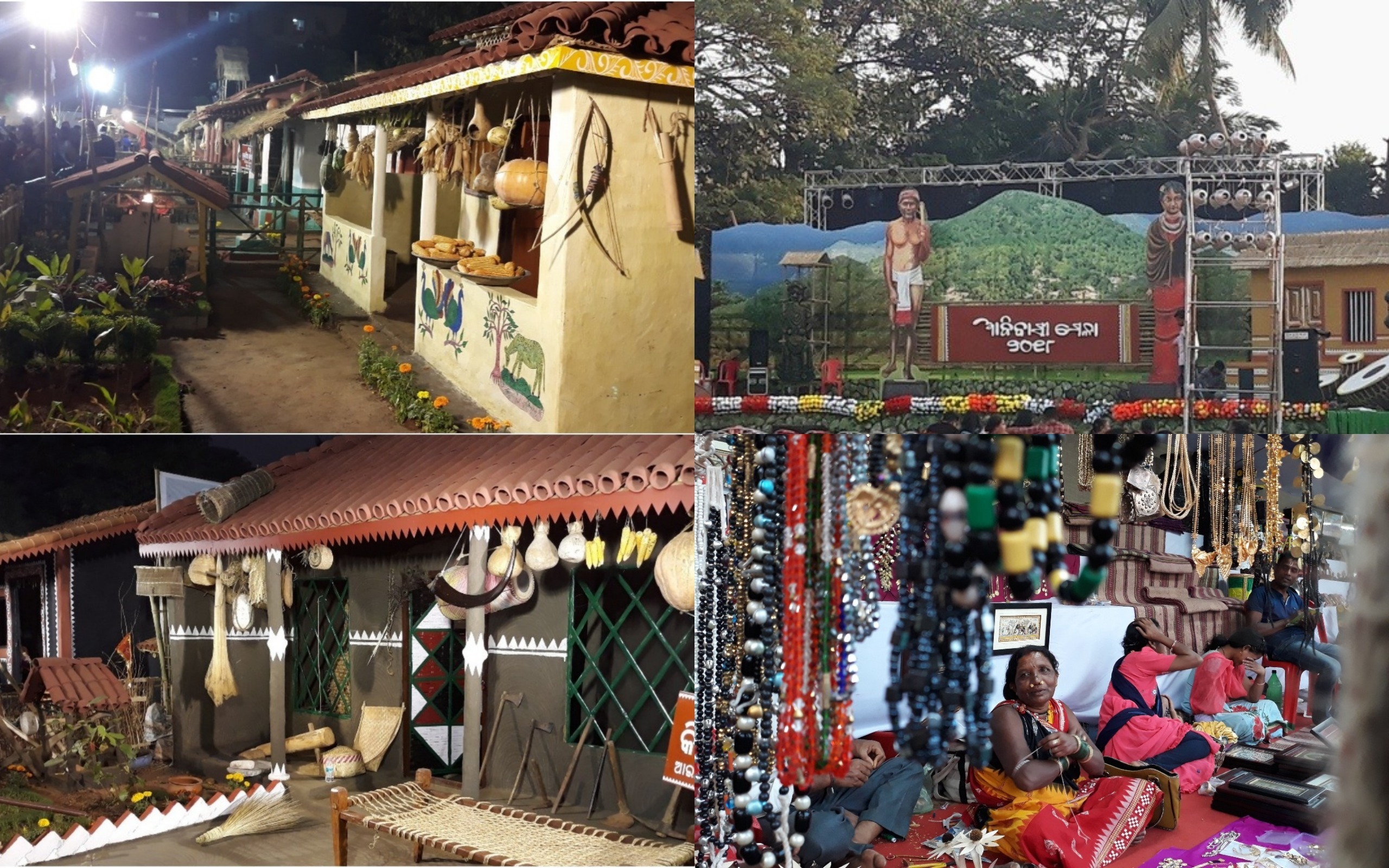 Bhubaneswar: The IDCO Exhibition Ground in Odisha capital seems to be in a gala mood with evenings thumping with the shrills and thrills of traditional Adivasi music and dance. Spread neatly across the rectangular ground, the Annual Tribal Fair is being hosted here for the first time.

In contrast to the earlier venue, the well-laid parking lots here make the entry and exit hassle-free for visitors. Towards the left are the Adivasi villages on exhibit while the stalls are on the right. The music floating across the venue from the stage set right in the centre floats adds a zing to the exploration.

“The footfall to the tribal fair has been increasing with every passing year and the police administration suggested that we change the venue because the zig-zag layout of Adivasi Exhibition Ground made it difficult for cops to control the crowd. The government approved the decision and the difference is pretty evident. There aren’t any parking issues, congestion is less and there is enough maneuvering space. We, of course, had to cut down on the number of stalls,” said Director of Scheduled Caste & Scheduled Tribes Research and Training Institute (SCSTRTI) A. B. Ota.

This year, there are 167 stalls in total. “Like every year, we have 24 tribal houses of different communities, 31 tribal haats, 32 tribal SHGs including NGOs, 35 art and craft stalls and 35 government stalls,” he said.

Anuradha, who has been visiting the fair for the last five years, said though there’s more space in the new venue, the one at Adivasi ground had a different charm and a perfect Adivasi ambiance.

Hailing from Mayurbhanj district, Jharna Nayak, who is selling spices at the fair, said business so far has been good. “I think the change in venue has helped boost sale as this place can accommodate more visitors. Last year, we earned around Rs 1.5 lakh and we are expecting double the amount this year,” she said.

Among the visitors were tourists from Italy who were quite amused by the exhibits. “The experience is lovely. There is definitely the language barrier, but it’s fun!” expressed Peter.

Tribal women and men are here selling traditional tribal jewellery, handicrafts, handloom and food, giving visitors a glimpse into their life. From paper mache to masks to wooden handicrafts to dhokra items, there’s a wide range of tribal artefact to explore at the art and craft section.

Odisha Co-operative Tassar & Silk Federation Ltd, for the first time, has put on display a demo of making Tussar yarns. There are silkworms, the cocoons of different kinds and Savitri Mandal can be seen spinning silk thread out of them. “Weaving Tussar and silk clothes is a time-consuming process but the earnings are quite good. We make around Rs 18-20 lakh in Adivasi Mela itself,” she said.

With chocolate cookies and muffins made of millet on exhibit, Millet Mission Odisha has its stall alongside that of the government’s this year. State co-ordinator, Dinesh Balam, said millet is an integral part of tribal life. Further speaking about the venue, he said, “This place is better, I agree. If the empty spaces were utilized well, some more stalls could have found a place here. Nevertheless, more people are approaching us since the walkways aren’t crowded.”

People flocked to the food section which had delicacies like moodhi mansa, dahi bada aalu dum, ghuguni, kulfi, etc. The wide space at food court made it comfortable for people to pick the dishes of their choice.