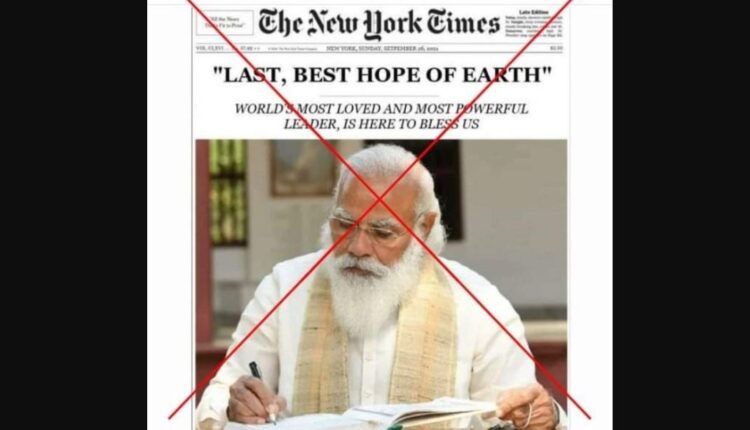 New York/Bhubaneswar: The New York Times on Wednesday issued a clarification that an image of a front page article featuring India’s Prime Minister Narendra Modi with the headline ‘Last, Best Hope of Earth’ was ‘completely fabricated’.

A photoshopped image of an NYT front page started doing the rounds on social media following PM Modi’s arrival in the United States of America for his three-day tour which included attending a QUAD leaders’ summit and holding bilateral talks with US President Joe Biden.

“Resharing or circulating photoshopped images online only adds to misinformation and uncertainty, at a time when truthful, trusted journalism is needed most,” NYT said in a tweet.

This is a completely fabricated image, one of many in circulation featuring Prime Minister Modi. All of our factual reporting on Narendra Modi can be found at:https://t.co/ShYn4qW4nT pic.twitter.com/gsY7AlNFna

The fake photo features a large image of PM Modi with a caption, “world’s most loved and most powerful leader is here to bless us”.  The image carries the date of September 26 but the word ‘September’ is spelt incorrectly.