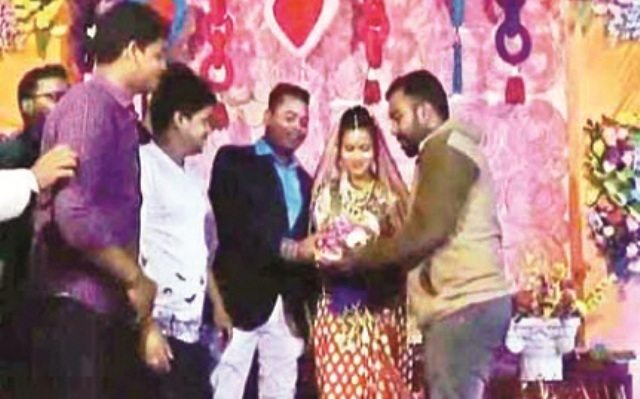 Angul: With onion price skyrocketing to all-time high of Rs 150 per kg, social media platforms are being flooded with hilarious memes and jokes over crisis of the essential vegetable. Meanwhile, a newly-wed couple in Angul district of Odisha receiving onions as gift has become the talk of the town.

Sources said one Santosh Mohapatra of Adimata Nagar here recently got married and was hosting a reception party on Sunday. A gift received from his friends stirred up a laugh riot in the middle of the function.

After handing a nicely-wrapped parcel, Santosh friends Jyoti Prakash Mishra, Bijay Prusty and Rajkumar Gupta asked him to open it on the stage right at the moment.When the groom unwrapped the parcel, he found onions weighing around 2 kg. The newly-wed couple and guests present at the function were amused to see the gift. Justifying it, Satosh’s friends sarcastically said that onion has become so expensive that they chose to gift it to their friend Santosh on his big day.

Worth mentioning,while price of onions stands between Rs 100 and Rs 150 in many parts of the state, the vegetable is being sold at Rs 120 in Angul.