NH blocked over cyclist’s death in road mishap in Odisha 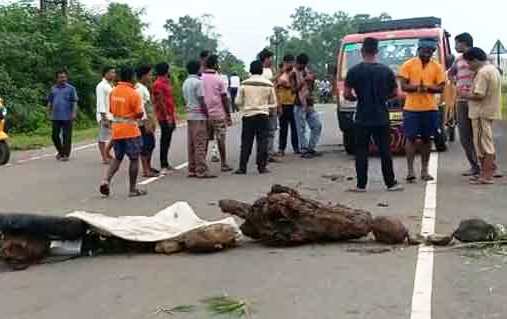 Rayagada: Locals blocked NH-326 near Bhujabala under Chandili police limits in Odisha’s Rayagada district today as a bicycle rider died after being hit by a speeding truck on the road.

The deceased, identified as Guabansha Chaitanya, was heading towards his workplace on a bicycle this morning when the truck hit the two-wheeler from rear leaving him critically injured. One Birasen Singh, who tried to save Chaitanya from the road mishap, also sustained injuries.

Both were rushed to the Rayagada district headquarters hospital, where Chaitanya was declared dead. On the other hand, Singh has been shifted to a hospital in Visakhapatnam as his condition deteriorated.

Tension gripped the accident spot following the incident as irate locals blocked road demanding compensation for the family of the deceased and victim. Vehicular movement was affected on the portion of the NH as many vehicles remained stranded on both sides of the road due to the blockade.

Local BDO and police reached the place and tried to pacify the locals. On the other hand, cops have seized the truck. However, the truck driver absconded after the accident.