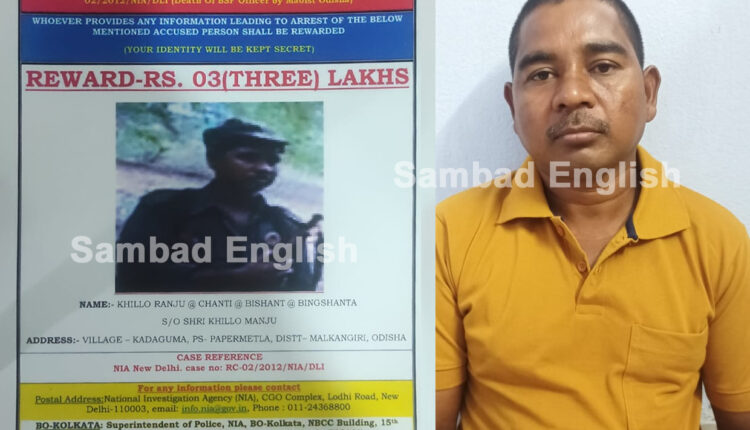 Chanti is the son of Manju Khillo from Kadaguma village under Chitrakonda police limits of the district.

Four days ago, NIA had put up posters seeking information on the four most wanted Maoists including top ultra leader Gajarla Ravi alias Uday and Chanti. “NIA arrested Ranju Khillo alias Chanti today and is taking him to the special NIA court in Bhubaneswar. Since the matter concerns NIA, they may be approached for an official statement,” Malkangiri SP Nitesh Wadhwani said.

It is pertinent to mention, Chanti carried a bounty of Rs 3 lakh on his head.

Four senior BSF officials including Commandant Kashwan were killed on the spot and two others sustained grievous injuries on February 10, 2012 in a massive blast of an improvised explosive device (IED) conducted by the arrested Maoist and his aides in Chitrakonda.

The IED blast took place at Janiguda main road between Balimela and Chitrakonda. A Bolero in which the BSF personnel were travelling was mangled after it was tossed up high in the air.