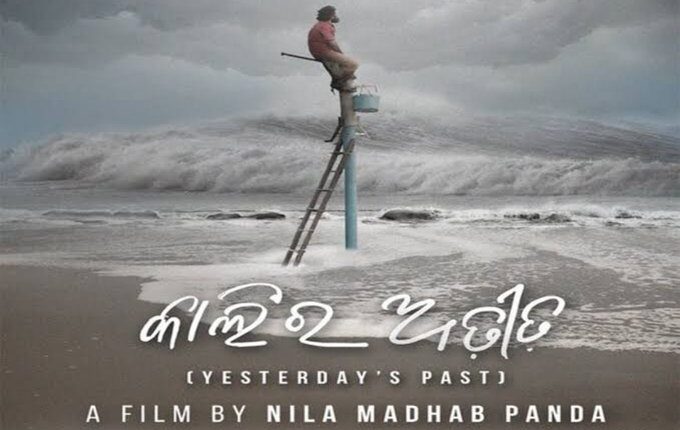 It is a story of Saatbhaya, a cluster of seven villages, in coastal Odisha that have been gobbled up by the rising sea. The recent Assessment Report of the Working Group I of the Intergovernmental Panel on Climate Change (IPCC) has warned of threats posed by sea level rise for coastal areas among others.

With this film, Panda — who has earlier made films such as “Kadvee Hawa” on how the poor farmers face the vagaries of nature and “Halkaa” about open defecation free India — makes debut in Odia, his mother tongue. Odisha bears the brunt of severe cyclones year after year.

The film that won the national award for the Best Odia Film for 2019, has already been screened at multiple international film festivals and now, it is headed for the 12th Annual Chicago South Asian Film Festival. As the film readies to hit the OTT platforms — it releases on September 3 on MX Player and MUBI, we caught up with Panda:

Excerpts from the interview:

Q: What prompts you to choose topics for your films that are of the beaten track, not run of the mill stories?

A: I don’t believe in the day-to-day mill. As an artist, I draw my stories mostly from pain, suffering. May be my own suffering or that of someone else’s that one has seen. Whether my child and I stay in Delhi and face air pollution or face cyclones every now and then in Odisha, you are witness to so much suffering.

For instance, the story of this film. It is a story about seven villages gobbled up by the sea. The villages’ civilisation is wiped off. And despite it, if you cannot think of telling that story, you are not a human. These are my own suffering, my own sorry. You calculate only deaths (in such tragedy), so I have no option but to tell you the story of the suffering behind it.

Q: Why did your film take about a decade to complete?

A: No, it took me 13 years to complete this. When I first went to the spot in 2005-06, only 3 of the seven villages were remaining. I had been tracking it for 13 years. In a decade or so, the entire civilisation was wiped out. Then I realised this story cannot be told in a documentary format, it needs a wider canvas; let me tell it as a fiction. Then I got the hook for fictionalising it.

Q: What was the prompt for the feature film — was the medium suitable to showcase submergence of seven villages on a film screen or you thought a feature film will take the message to the masses more effectively?

Q: Did you shoot at the actual location or someplace else? How did you go about the film story and shooting?

A: Characters are fictional, but the locations are the same and nearby places. A unique thing about this film is that this is my first film where I did not have any script. I just had one character, took him to the spot and started shooting. I only had a one-line story, ‘A man whose family, whose village has been gobbled up by the sea, he realises, he also needs to go into the sea and waits for the cyclone.’ He feels there is a different world out there, he also wants to join his people there.

Q: What was the response from your actors, especially the protagonist?

A: It was very hard for Pitobash Tripathy. I took him directly to a jungle and made him sit there. No character outline, no script, nothing. He and I started developing that character step by step, it evolved slowly.

Q: What kind of research have you brought in here, especially cyclone related?

A: There are a lot of things. But most importantly, I have been tracking the village, that area for 13 years and have seen it literally going underwater. The handpump in the middle of the village — we drank water from it in 2006 — is now in the sea, what else do you want?

Of course, there is academic research too. The IPCC (Intergovernmental Panel for Climate Change) report that tells us the ‘Code Red’ warning for humans today. I have been telling the same thing since 2005-06 — sea level is rising; villages are going under. People are still sceptical about the UN report. I have said this 15 years ago.

Q: Does your film end on a sad note, sombre note or has some solution-oriented end?

A: I am a storyteller. My job is not to provide solutions. I can highlight an issue; I can shock people into waking up to the harsh realities of the devastation caused due to climate change. The film is a wake-up call. Solution has to come from the government (and) people will find out for themselves.

Q: But these villagers suffered for no fault of their own. Their emission is negligible. They are bearing the brunt of someone else’s emissions far away. How can they find out any solution?

A: Very rightly said, they don’t even have a motorbike, forget anything else. What emissions will they contribute? You won’t find the words ‘climate change’ in any of the dialogues in my film. Does it matter if I use the word or not? But the film is about change.

Q: How has the film been received at international platforms?

A: Very good response till now. This has been doing all film festival circuits. Started with the UK, then Australia, then Norway, Prague. Now the film is going to Chicago. People there are finding it as a ‘shocking’ film. But I feel, this ‘shock’ is necessary for them. Else, they will never understand. One cannot just talk about climate change. You will have to change when you see the manifestation of climate change in this form.

Q: What was the reason for making this film in Odia language?

A: I wanted to tell the story of the sons of the soil. The film hardly has any dialogues. “Mitti ki kahani mein bolne thee, mitti ki bhasa mein bolne zaroori tha (It was the story from the ground, so it needed to be in the language spoken there).