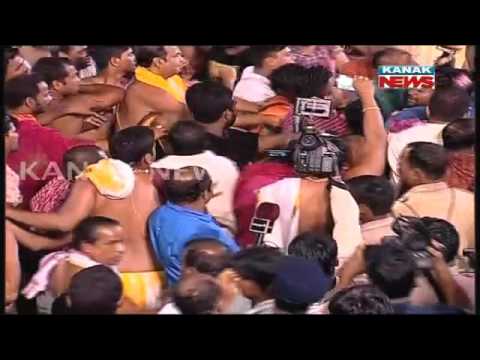 The Singhadwara police today arrested Kashinath Khuntia, a servitor of the Sri Jagannath temple here, for his alleged involvement in disturbance during the Niladri Bije rituals of Lord Jagannath and his siblings this year.

According to reports, Khuntia, who was declared as absconder by police after the infamous Niladri Bije disturbance incident, was detained by Singhadwara police yesterday night. The servitor was arrested today, sources said.

It may be mentioned here that the Orissa High Court had ordered interim stay on the action of the police in issuing non-bailable warrant (NBW) against Khuntia and declaring him an absconder in connection with the incident of misbehaviour towards Puri Collector Arvind Agarwal during Niladri Bije. However, Khuntia has been arrested for allegedly assaulting reporters and delaying the Niladri Bije rituals.

It may be recalled that some sevayats had an altercation with the collector during the Niladri Bije rituals when he confronted them after the servitors and their kin alighted from the Taladhwaja chariot, in clear violation of Orissa High Court and Sri Jagannath Temple Administration (SJTA) orders. The incident had led to delay in the conduct of rituals and pahandi of Lord Sudarshan.

Three more die of JE; toll up to 56 in Odisha’s Malkangiri