Amid strong hints that the government may change in Bihar, Chief Minister Nitish Kumar had a telephonic conversation with Congress interim President Sonia Gandhi. 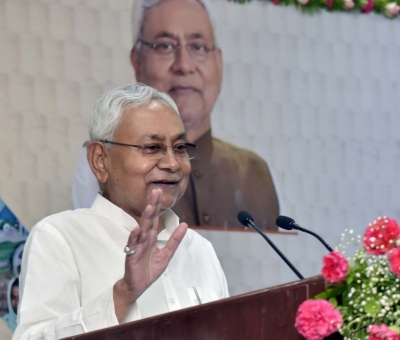 Patna: Amid strong hints that the government may change in Bihar, Chief Minister Nitish Kumar had a telephonic conversation with Congress interim President Sonia Gandhi.

Though the full details of the phone call, which happened on Sunday night, are not officially known, sources said that the two leaders discussed the formation of a new government in Bihar.

The effect of the telephonic conversation was visible in Patna as Congress’ state president Madan Mohan Jha and party legislature leader Ajit Sharma called a meeting of its legislators in Sadakat Ashram to discuss the future course of action.

Speculation is rife in Bihar that Nitish Kumar is likely to move out from NDA and join the Mahagathbandhan.

Nitish Kumar already has two meetings with RJD leader Tejashwi Yadav on Saturday and Sunday night. Following that, he had a telephonic conversation with Sonia Gandhi as well.

The BJP is running out of options to do the damage control. Sources said that the party’s top leadership desperately wants to stay in power till 2024 and at the same time it is also taking a dig at JD(U). The BJP state president in particular frequently attacked the Nitish Kumar government apart from other leaders.

The roadshow of Amit Shah and J.P. Nadda in Patna on July 31 could be the final nail in the souring political relation between the BJP and JD(U).

The BJP did the ‘Prawas’ programme in 200 Assembly constituencies of Bihar, which has been taken as a threat by the JD(U). The party’s think tank realised that the BJP is violating the alliance norms. Hence, Rajiv Ranjan Singh alias Lalan Singh, the national president of JD(U) said that the BJP was free to do Prawas programme in all 243 seats and the JD(U) is also entitled to do the same.

In case of the formation of a new government in Bihar, Nitish Kumar, who is considered as having a sharp political brain, would not resign from the chief minister post, like he did in 2017 after he broke the alliance with Mahagathbandhan and formed the government with BJP. At that time, Nitish Kumar knew that the Governor was appointed by BJP and it would not impose the President’s rule in the state.

At present, the same Governor is in the Raj Bhawan. Nitish Kumar, has the power to sack every minister of the BJP from his cabinet and appoint MLAs of RJD, Congress and Left parties as ministers. He did the same in 2013 and he may repeat the same in 2022.

In case of the BJP applying pressure on the Governor to ask Nitish Kumar to prove the majority in the House, he would prove it with the help of RJD, Congress and the Left parties.

Nitish Kumar is also feeling uneasy with the track record of BJP. The saffron party, over the years, has been weakening its alliance partners like its oldest allies Shiv Sena and Shiromani Akali Dal (SAD). Nitish Kumar probably believes that if he stays with the BJP for too long, it may hurt his party. Lalan Singh has already said that the BJP conspired against JD(U) in the 2020 Assembly election by using Chirag (Chirag Paswan) model. As a result, the party reached 43 seats in the Bihar Assembly. In 2015, JD(U) had 69 seats.

Nitish Kumar may use corruption cases against the BJP ministers as a tool to exit from the NDA. Ram Surat Rai, the land reforms and revenue minister is facing the charges of transfer-posting case and Tar Kishore Prasad, the deputy CM is facing the corruption charges of alloting contracts of ‘Har Ghar Nal Ka Jal’ to his family members.

Why is the BJP looking helpless?

After the formation of government under Nitish Kumar in Bihar, the BJP, which is in the role of elder brother, was deprived of the key post like home ministry to dictate terms in the state. Hence, it has started criticising the Nitish Kumar government while staying in power. However, it is yet to ascertain whether the BJP opted such a policy under the direction of central leadership or leaders in the rank of Sanjay Jaiswal were going hard on Nitish Kumar on their own.

In Bihar, the BJP has two deputy chief ministers — Tar Kishore Prasad and Renu Devi and state president Sanjay Jaiswal, but they are being directed by central leadership of BJP, say sources.

These leaders are not capable of playing the role of a bridge between Nitish Kumar and the central leadership of BJP unlike Sushil Kumar Modi. As a result, the BJP has sent Dharmendra Pradhan twice to Patna for the damage control, but the road show of Amit Shah and J.P. Nadda and Prawas programme in 200 Assembly seats might have forced Nitish Kumar to take strong decision.