INDIAINDIA & BEYOND
By Sambad English Bureau On Jul 26, 2017 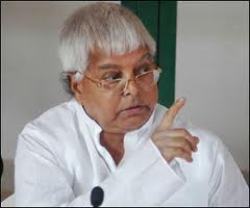 Patna: RJD chief Lalu Prasad on Wednesday said Nitish Kumar’s resignation as Bihar Chief Minister was “pre-planned” as he has not ruled out the possibility of joining hands with the BJP.

Addressing reporters after Nitish Kumar resigned over the corruption allegations against Deputy Chief Minister Tejashwi Yadav, Lalu Prasad called for a meeting of the MLAs of the Grand Alliance – JD-U, RJD and Congress – to elect a new leader.

“Nitish is playing into the hands of the BJP. After resigning as Chief Minister he did not rule out the possibility of joining hands with the BJP. Everyone knows that Nitish is aligned with Modi,” Lalu told reporters here.

Lalu said that with the resignation of Nitish Kumar, the whole government including Tejashwi Yadav has gone.

“Now let Nitish Kumar and Tejashwi stay out and the MLAs of JD-U, RJD and Congress should elect a new leader. Since we are the single largest party in the Assembly so the claim of legislative party leader goes with us,” Lalu Prasad said.

He said that Janata Dal-United President Nitish Kumar had asked for the resignation of Tejashwi Yadav.

“We were not at fault so why should we (Tejashwi) resign. As far as explanation was concerned, everything was explained to Nitish Kumar,” he said.

“He is facing charges of murder, which is bigger than the charges of corruption. He has accepted about the charges in his election affidavit,” Lalu said.

“We were aware of the case since long but did not find it appropriate to disclose. Nitish Kumar knows about this so he tendered his resignation. He is aligning with the RSS. Everything was set,” he added. (IANS)

Jharsuguda airstrip to be ready by September