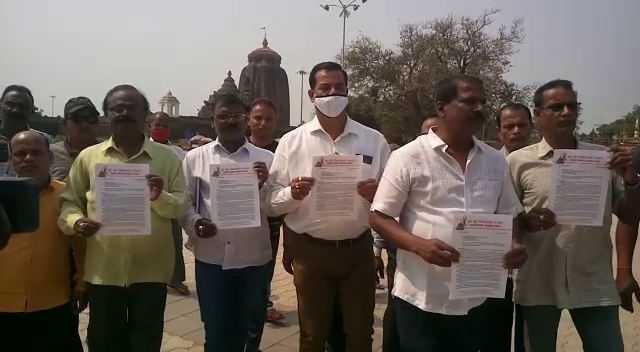 Bhubaneswar: Amid agitation against controversial bye-laws framed by the National Monuments Authority (NMA) of Ananta Basudeba and Brahmeswar temples, the protestors today submitted a memorandum to the ASI demanding withdrawal of the draft notification.

A delegation of Lingaraj Sena led by the outfit’s president Rajendra Samartha today met Arun Kumar Mallick, the Superintendent of the Archaeological Survey of India (ASI) of Odisha Circle and handed over the memorandum appealing to the Centre for roll-back of the proposed bill that will badly affect the servitors and inhabitants residing around the Lingaraj Temple in Ekamra Kshetra.

In the memorandum, the Lingaraj Sena described Bhubaneswar as the ‘cathedral’ city of Odisha.

Demanding for withdrawal of the bye-laws, the delegation in the memorandum stated that the Ananta Basudeba Temple is situated near Lingaraj Temple on the bank of Bindusagar, the water of which are flown from crores of sacred rivers and ponds. It is a famous temple of Vaishnavites. A number of devotees from different corners come here to pay ‘pinda’ (homage) to their ‘pitru purusha’ (ancestors) and take Prasadam of Lord Basudev. The devotees also take Prasadam of Lord Basudev on all fasting days, festivals and on days of rituals in case of anyone’s death. Also, the temple witnesses huge crowd on Ananta Brata, a Hindu festival of Lord Ananta Basudev. The sentiments of devotees depends on the interest of servitors, who will be affected due to the enforcement of the bye-laws.

On Brahmeswar temple, the documents read, “Ekamra Kshetra is a land of crores of Linga temples. The Brahmeswar temple is a part of Lord Shree Lingaraj Temple. A large number of devotees observe Maha Shivaratri and pay Mahadeep on that day.”

A large number of inhabitants (sahis) which are more than millenium also exist around the Lingaraj Temple. These inhabitants are of mainly sevayat families, who have been rendering services to deities since time immemorial. As they are likely to be severely and adversely affected by an intervention of authorities like the draft notifications, they must be consulted before any process to restrict their rights is undertaken by the NMA, the memorandum stated.

“Any adverse impact on servitors will also affect the rituals of both the temples of Lord Ananta Basudev and Lord Brahmeswar,” Samartha said warning that the protest will be intensified if the bye-laws for two ancient temples in Ekamra Kshetra are not withdrawn.

Speaking over the issue, the ASI Odisha Circle Superintendent said that he will send the memorandum on ‘Request for withdrawal of draft notification on heritage bye-laws for Shree Brahmeswar Temple and Shree Ananta Basudeba Temple in Ekamra Kshetra, Bhubaneswar, published by the NMA’ to the concerned authorities.

“I have received the memorandum from Lingaraj Sena. But, it is out of my control. I will forward it to my concerned authority and the decision is upto the Ministry of Culture,” Mallick said.

The Father of Artificial Intelligence and his Odisha connection