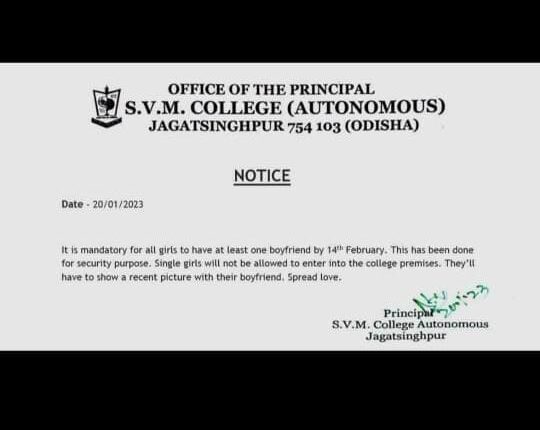 Jagatsinghpur: Authorities of SVM Autonomous College in Jagatsinghpur lodged a police complaint after a fake notice asking girl students to arrange at least one boyfriend each went viral on social media.

“It is mandatory for all girls to have at least one boyfriend by 14th February. This has been done for security purpose. Single girls will not be allowed to enter into the college premises. They will have to show a recent picture with their boyfriend. Spread Love,” said the notice containing fake signature and seal of SVM College Principal.

The authorities of the college later clarified that someone has circulated the fake notice to tarnish the image of the institution.

“The fake notice dated on 20.01.2023 has been notified without any official letter number and by misusing the scanned signature of the Principal with an intention of tarnishing the image and renowned institution,” said an FIR lodged by the college authorities with Jagatsinghpur police.

The college authorities urged the police to take the necessary action on the issue.