No takers for makeshift idol immersion ponds in Odisha! 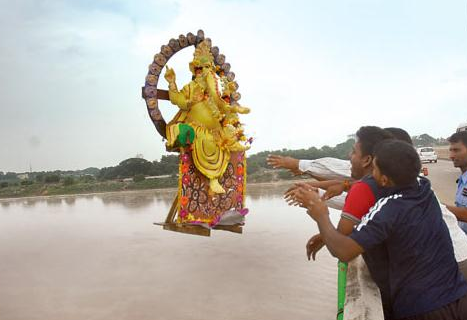 Denizens continue to flout the directives issued by Odisha State Pollution Control Board (OSPCB) to immerse idols in makeshift ponds created near several water bodies across the city here.

Before the onset of the festive season, the Board had issued directives to all District Collectors and civic authorities citing concerns over the soaring pollution levels.

However, lack of coordination between the enforcing authorities has resulted in unabated pollution with people immersing idols in the water bodies, causing discontent among the environment activists.

Ahead of Dussehra and Kali Puja, there is a rising concern of pollution with activists demanding strict enforcement of the directives.

Regional Officer of the Board, Hadibandhu Panigrahi has assured that stringent action will be taken against the erring officials.

“We have already issued notices to all authorities regarding the same and will hold an inquiry into why it has not been complied with”, he added.