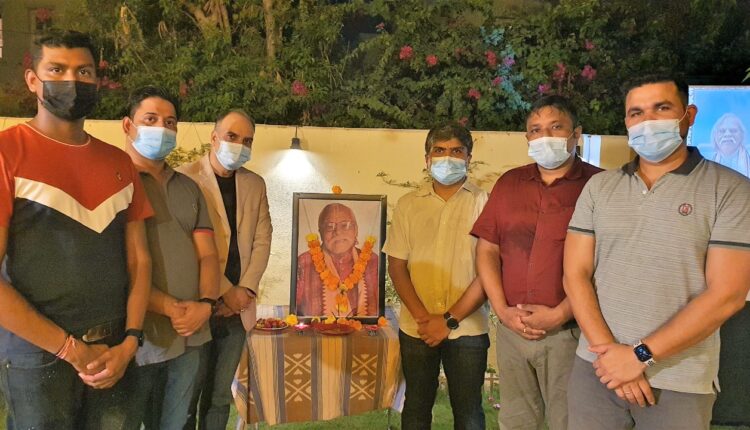 Atal Babu had a strong connect with the UAE. His maiden and only foreign trip was in September 2017 when he had come to attend the Nuakhai Bhetghat Celebrations in Dubai. He was 88 years old then and had mersmerized the audience with his energy, enthusiasm and zest for life.

At the outset a lamp was lit in front of his photograph and floral tributes were paid, led by senior community member Rajesh Tripathy. Video clippings from his visit were played out. People were particularly impressed by his ‘Age is just a number’ speech at the Nuakhai bhetghat. He had also enthralled the audience when he surprisingly joined the kids on stage, dancing to a song from one of his films. His dance with the kids was one of the enduring memories of that event. All the attendees fondly recalled about their own interactions with Atal Babu during his Dubai trip.

Senior Member of the Community and General Manager of a large FMCG company, Priyadarshee Panigrahi appealed to the Government of India to confer India’s prestigious civilian award – Padmashri on Panda. This would be a befitting tribute to Panda and his legacy he said. The meeting overwhelmingly passed a resolution on this request and resolved to kickstart an international campaign to petition the Government on this issue.

Active member of the community and Automotive Industry Professional, Pritish R Dash, seconded the appeal for greater appreciation of Atal Babu’s work. He recalled with fondness, Atal babu’s speech in Dubai where he had mentioned that ‘Age is just a number’. He said Atal babu was a very humble and unassuming character.

Sudhanshu, a sales and marketing professional, who hails from Sonepur, the district in which Atal Babu resided, particularly recalled Atal Babu’s smiling demeanor and said that this inspired him to lead a positive and fun-filled life.

IT Professional and Poet-Writer Prashant Meher, while conducting the function talked about UAE’s Western Odisha’s community’s link and love for Atal Babu. Atal Babu had a very strong fan base in UAE and this condolence meeting is one small way of showing the community’s respect for Atal babu and his legacy.

Other prominent attendees Rajesh Tripathy, General Manager of a leading global business school, and Environment management professional Alokmay Behera were unanimous in their views that – steps should be taken to protect, promote and preserve Atal Babu’s body of work.

All the members felt that such commemorations on foreign soil are important to promote, preserve and appreciate our cultural heritage and honor eminent personalities and spread the word about their work.