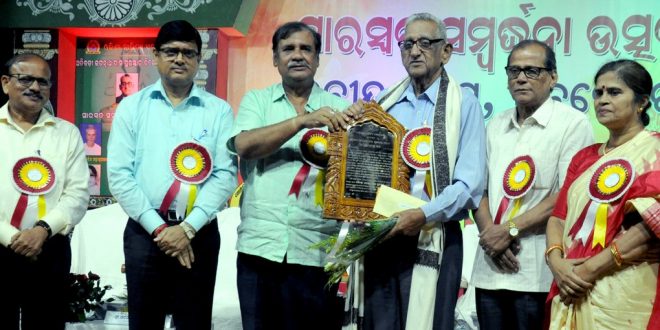 Bhubaneswar: Noted poet Ramakanta Rath has been conferred with the prestigious ‘Atibadi Jagannath Das Samman’ for the year 2018, the highest honour of Odisha Sahitya Akademi, for his contribution to Odia literature.

He received the award from Culture and Tourism Minister Ashok Chandra Panda at a function organised by Odisha Sahitya Akademi at Rabindra Mandap in the city. He was given Rs 1 lakh as prize money.

The literary body also felicitated 15 other litterateurs of the State this evening.

Rath is famous for his poetry book ‘Sriradha’. It’s acknowledged as a modern classic. Some of the poems including ‘Kete Dinara’, ‘Aneka Kothari’, ‘Sandigdha Mrigaya’, ‘Saptama Ritu’ and ‘Sachitra Andhara’ are considered as his best works in the Odia poetry.

A number of his poems have also been translated into English and different other Indian regional languages.

Earlier, he was conferred the Sahitya Akademi Award in 1977, Saraswathi Samman in 1992, Bishuva Samman in 1990.

He has also received country’s third highest civilian honour, the Padma Bhushan in 2006.

Rath, born on December 13, 1934, in Cuttack, has completed his master degree in English from Ravenshaw College (now it is an university) and joined in Indian Administrative Service in 1957.  He was the former Chief Secretary of the State.