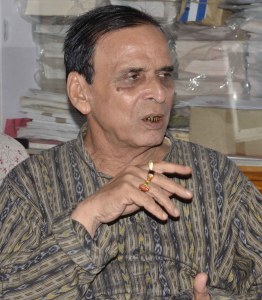 Rath, 70, died at a private hospital here this afternoon.

A Sahitya Akademi Award winner, Rath is known for organising the international theatre festival in Cuttack for more than 20 years. He won the prestigious literary award for his One Act Play ‘Nisang Bisarga’.

He wrote a play called “Aie Desa, Aie mati” at the young age of 15 and then never looked back in his artistic journey. “Mansara Phula” is his another widely acclaimed play, which was staged at various theatre festivals across the country.

Rath, who is known for starting the new trend of drama in Odisha, had scripted, directed, acted and organized many plays on various subjects.

Since 1968, Rath has been on the ever-going move of popularizing the theatre of Odisha. He made the Odia language a part of the national plays.