Nothing is impossible if you try hard, says Paralympian Bhavina after reaching final 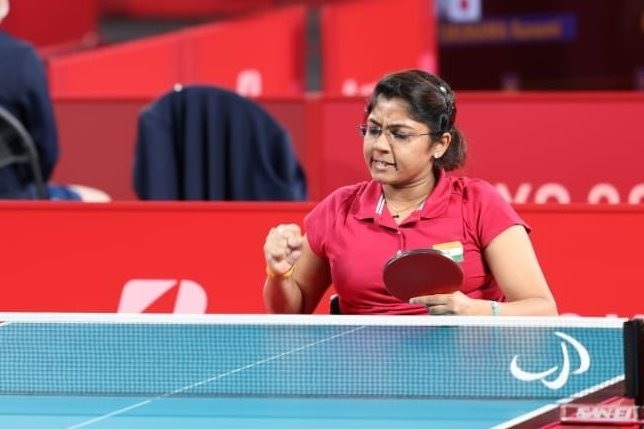 Tokyo: So strong have been the Chinese in para table tennis that Bhavina Patel has always been told that beating them is impossible.

“But I have always believed that nothing is impossible if you give it your best shot. And today I did it,” Bhavina said on Saturday after beating China’s Zhang Miao in the semifinals of the women’s singles Class 4 section at the Paralympic Games in Tokyo.

“It is the first time that an Indian player had beaten a Chinese opponent. It’s a huge, huge achievement for me. Everyone used to tell me that beating a Chinese player is impossible. But today I have proved that nothing is impossible in the world. Everything is possible if you want to do it,” said Bhavina after winning her semifinal match.

She thanked the people of the country, the Paralympic Committee of India (PCI), the Sports Authority of India (SAI), her sponsors Olympic Gold Quest (OGQ), Blind People’s Association, Ahmedabad (where she learned table tennis) and Target Olympic Podium Scheme (TOPS) for supporting her.

“It is because of their support that I could reach this stage today. Thank you, everyone,” she added.

“I have never considered myself disabled. Today I have proved that nothing is impossible,” she said.

Bhavina, a government employee working for ESIC in Ahmedabad, Gujarat, on Saturday became the first Indian table tennis player to reach the final at the Paralympic Games.

“If I maintain the same standard of play, I can win the gold medal,” she said, adding that she did not expect to reach this stage when she started her journey in her first Paralympics.

“When I started, I never thought I would reach this stage. I came here with the aim of giving my hundred per cent in every game. And that is what I have done so far. If you give your 100 per cent to something, then medals will come,” Bhavina said in a video posted by the Paralympic Committee of India on Twitter.

Asked about the final, Bhavina said she was mentally ready for the encounter with Zhou Ying of China, to whom she had lost in her opening match in Tokyo. “I am ready mentally for that match. I will give my 100 per cent in that match too,” said Bhavina.