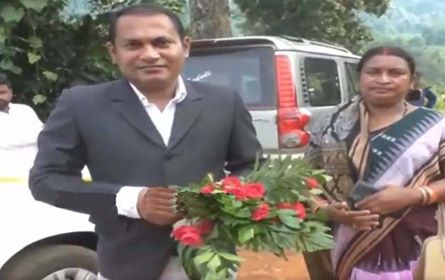 Jajpur: Showing a goodwill gesture, a Non-Resident Odia (NRO) residing in Singapore has donated Rs 1 lakh as working capital for the people of Nagada of Jajpur district that shot to limelight due to malnutrition deaths in 2016.

To make the Juang tribals self-sufficient and help them in their livelihood, NRO Satya Sutar, a resident of Jajpur, donated Rs 1 lakh as working capital and plans to open a rural bank to be named after Nagada. The people in the area can take loan from the ‘Nagada Bank’ and utlilise the money in their agriculture and other small businesses. They will not have to pay interest for the loan, said Sutar.

Moreover, the NRO has urged all stakeholders to contribute to further increase the working capital.

Sutar said,”Though the state Government has taken initiatives for infrastructure development in the tribal-dominated area, a lot more need to be done to make the people self-sufficient.”

The NRO also donated clothes to children in the area during his visit. Overwhelmed with his initiative, residents of Nagada have expressed their gratitude towards the NRO.