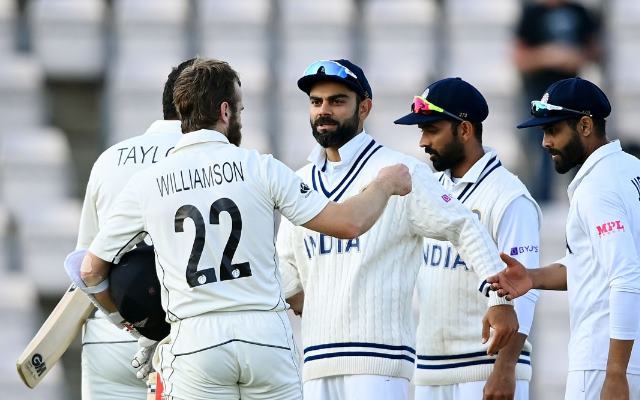 Auckland: New Zealand skipper Kane Williamson termed India a “formidable” and a “truly great side”, and that the Black Caps were “proud to achieve a win” against the Virat Kohli-led side in the World Test Championship (WTC) final at Southampton recently.

New Zealand won the rain-marred summit match against India by eight wickets to bag the winning purse of Rs 12 crore along with an ICC Test Championship Mace.

“In sport, when you have tournaments and finals, these are set up in a way to provide excitement and opportunity in a one-off game. It never really tells the whole picture. As we know, this Indian team is a formidable side. They truly are a great side,” Williamson told India Today on Monday.

“We are proud to have achieved a win in this match but that takes nothing away from the quality that India had in their team, how strong they are year in and year out. I have got absolutely no doubt they will win plenty, plenty more.”

Williamson employed tall paceman Kyle Jamieson at the start of the reserve sixth day of the Test and it turned out to be the New Zealand skipper’s masterstroke, after the bowler accounted for both overnight batsmen Cheteshwar Pujara and Virat Kohli to leave India in dire straits in the second innings.

Williamson said India too had good depth in their seam bowling department and their pace attack was “relentless”.

“You feel the quality every time you come up against them. They are relentless with the ball. The seam bowling depth in the world is probably the best in the world. Their spinners, they are incredible bowlers and the batting perhaps need no mention; it’s world class. And the depth they have been creating.

“It’s the passion that the country brings to the sport. Although I play for a different country, I think we can all appreciate the passion they bring to the game. It’s rewarding for everybody that plays the game,” he added.

Bhubaneswar Unlock: What to expect from new guidelines w.e.f. July 1?