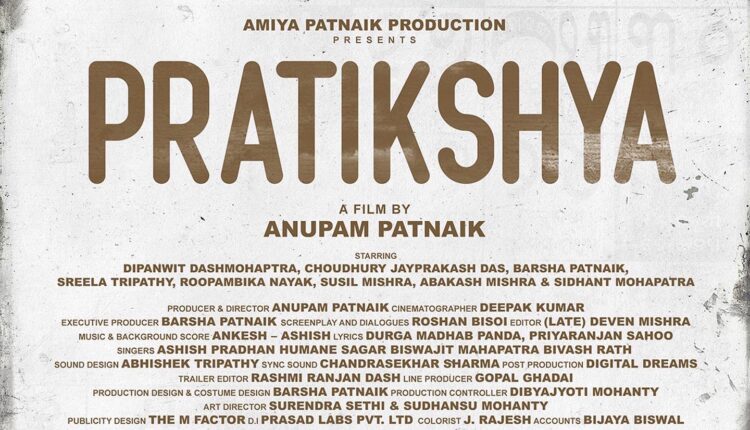 Patnaik shared the poster of the upcoming movie on his Twitter profile on Monday.

“Waiting for good to happen? You might just lose the important ones! Presenting the first look of ‘Pratikshya’.  Made with love, made with passion, made for theaters only. Let’s bring back those golden days!” his post read.

Waiting for good to happen? You might just lose the important ones!

Presenting the first look of “Pratikshya”.

Made with love, made with passion, made for theaters only.

Screenplay and dialogues of the upcoming movie is written by Roshan Bisoi. Deepak Kumar is the cinematographer while credits for editing go to late Deven Mishra.

Music and background score of the movie is helmed by Ankesh-Ashish. Durga Madhab Panda and Priyaranjan Sahoo have penned the lyrics. Popular singers Ashish Pradhan, Humane Sagar, Biswajit Mahapatra and Bivash Rath will lend voices to several songs in the upcoming movie.

“Sometimes, you make art that is less art and more you. As they say, art imitates life,” Anupam told Sambad English while introducing the official posters of ‘Pratikshya’.

‘Pratikshya’ narrates the life of an unemployed graduate who struggles with dilemma of securing a government job to save his family after they meet with a medical crisis.

“It’s quite a relatable and emotional film and has the essence of Bhubaneswar,” Anupam said.

He also revealed that apart from the pivotal roles by Dipanwit, Barsha and Choudhury Jayprakash Das, the movie will feature actor Sidhant Mohapatra in a ‘very special’ role.

The posters, trailer and songs of ‘Pratikshya’ will be launched soon.

Narrating how the Odia cine-industry is going through a rough phase, the filmmaker said, “ We are focused on providing wholesome entertainment to the audience… Hope these baby steps will help in reviving the industry. We need all your love and support!”

We have made this film for theatres only. We want to bring the audiences back to the theatres! It’s a decent film made for entire family,” Anupam added.

‘Pratikshya’ is scheduled to hit theatres this December.