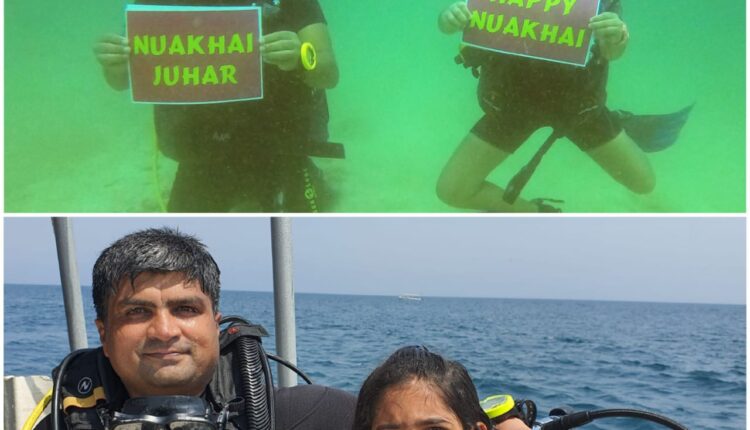 Dubai: In a novel gesture, an 11-year-old scuba diver from Odisha dived into the Arabian Sea in the Gulf of Oman on the east coast of United Arab Emirates (UAE) at Fujairah to extend wishes on auspicious Nuakhai, the most popular agrarian festival in western Odisha.

The youngest scuba diver Tisya Panigrahi along with her father Priyadarshee Panigrahi, a Dubai-based trained scuba diver, jumped into the sea at Dibba Rock dive site and greeted people with celebratory placards ‘Nuakhai Juhar’ and ‘Happy Nuakhai’ under the sea on eve of Nuakhai, which is being celebrated today.

Banks in Odisha to remain closed on Nuakhai

Both the divers descended to a depth of around 40 feet amidst colourful coral reefs and beautiful marine life and sent out their wishes.

This is said to be the first underwater event on the occasion of Nuakhai and quite unique.

Born in Sambalpur district, Tisya is the youngest scuba diver in Odisha. On August 22 last year, she obtained her PADI (Professional Association of Diving Instructors) Junior Open Water Scuba Diver License in UAE at an age of 10.

The youngest scuba diver was inspired by the Scuba Diving exploits of her father Priyadarshee Panigrahi, who has been diving since 2012 after getting his PADI Open Water Scuba Diver License from Vietnam.

Priyadarshee is a prominent Non-Resident Indian (NRI) and is actively involved in community affairs and promotion of India’s culture and traditions at the International level. He is based in Dubai and works as a General Manager with a large Fast Moving Consumer Goods (FMCG) company.

Priyadarshee said, “If a licensed scuba diver doesn’t dive for more than 6 months, he/she has to do a refresher course. Our last dives were held on April 4 this year and we were looking forward to dive again. We chose September 10 for our dives and then realised Nuakhai festival falls on September 11. Hailing from Odisha, particularly from Sambalpur, Nuakhai holds a very special in our hearts. We decided to do something unique on this occasion and this idea germinated.”

“An underwater message on Nuakhai has never happened before and I thought this is a good way to popularize Nuakhai at the National/International level. More and more people will know about Nuakhai and it will definitely add to the spread of our culture and traditions’ he added.

According to Tisya, “Diving is something that I enjoy a lot and the idea of doing something extra while diving was nice. It was fun to hold the placards and pose for pictures and videos. Nuakhai has many memories for me. I particularly like the festival because we get to dress in traditional clothes, dance to peppy Sambalpuri songs and get great traditional foods”.

Nuakhai not only a festival, it is our identity: Odisha CM