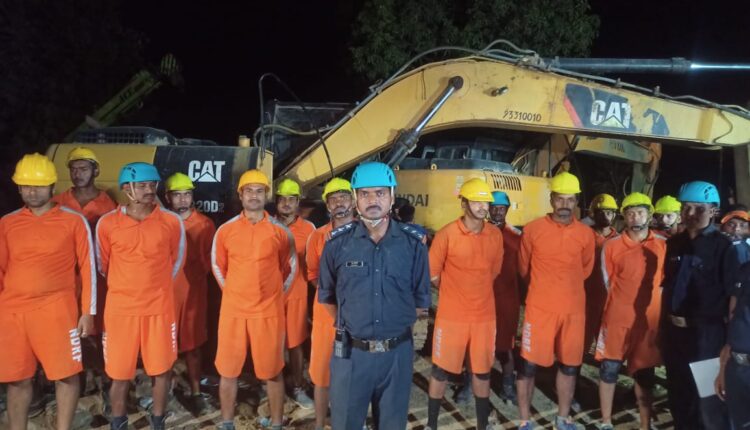 Bhubaneswar: During the 104-hour-long operation in which Rahul Sahu, an 11-year-old boy from Chhattisgarh’s Janjgir Champa district was rescued from a borewell on Tuesday, a National Disaster Response Force (NDRF) officer from Odisha played a crucial role.

Mahaveer Mohanty, an Inspector with the NDRF, who hails from Odisha, was leading the rescue team and chalked out plans to safely recue Rahul Sahu from the 80-feet-deep borewell.

At around 5:45 pm on June 10, the Janjgir Champa district SP called up the NDRF official and informed that a boy has fallen into a borewell and sought help to rescue him. Acting as per the higher-ups, Mohanty along with his team members and instrument left for the location from Bhilai the same evening.

On the way, Mohanty remained in touch with the local administration of Janjgir Champa district and advised them to remove the gathering from the spot and provide oxygen and water to the trapped boy. The initial hours were very crucial in the rescue operation, he added.

During the 275-km travel between Bhilai and the location, Mohanty prepared a blueprint for the rescue operation.
Carrying out the rescue operation in 45 degrees temperature round-the-clock for around five days and cutting a dolomite stone layer while reaching the trapped boy were the major challenges, he said.

“We have to carry out the rescue operation very carefully as much pressure would have resulted in collapse of the borewell. Also, we have to ensure the boy remained safe,” Mohanty added.

This is the first time this kind of operation has been carried out in Odisha and Chhattisgarh regions.

Over 500 personnel, including officials of NDRF, the Army, local police and the administration, were involved in the rescue operation that was underway since Friday evening.

At around 2 pm on Friday, Rahul Sahu fell into the unused 80-feet-deep borewell in the backyard of his house in Pihrid village in Malkharoda development block of Chhattisgarh while playing.

Following his rescue on Tuesday evening, Rahul Sahu was taken to Apollo hospital in Bilaspur district in an ambulance under the observation of specialist doctors.

Skeletal remains of another elephant exhumed in Odisha forest