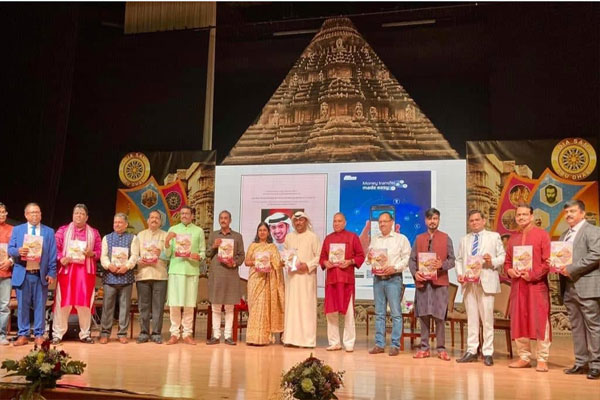 The ceremony was hosted at the historic Abu Dhabi theatre facing Arabian Sea. The theatre was decked up aesthetically and flaunted the lavish look of a mini Odisha.

The event was celebrated amidst a distinguished gathering including members and relatives of OSA, prominent NRIs, officials of Indian Embassy and members of diplomatic core belonging to different countries.

The OSA observed Utkal Dibas, in person, after a gap of two years due to COVID-19 disruption. The festival commenced with the lighting of ceremonial lamp by the invited guests. Delivering welcome address, president of Abu Dhabi Odia Samaj Pradeep Rath elaborated the series of charitable and social services rendered by OSA during COVID period and Fani cyclone in Odisha.He was lauded the active role of OSA members in evacuating 2000 stranded Odias safely to Odisha by 14 chartered flights during the advent of pandemic.

Cine Star Kuna Tripathy eulogized the exemplary endeavours of OSA in uniting NROs at Abu Dhabi. He gave a clarion call to Odia community abroad to be pure Odia and proud Odia.

Attending the festival as guest of honour, journalist and chairman of World Odisha Society (WOS) Kishore Dwibedi lauded the leading role of OSA in promoting and popularizing brand Odisha in the United Arab Emirates.

The anniversary celebration witnessed the release of a colourful souvenir titled ‘PRABASI UTKARSHA’. The prize publication was edited by Satyabrata Patra and Arunima Mishra. The special attraction of Utkal Dibas was presentation of a cultural Jamboori by Ollywood’s Kuna Tripathy, Abhijit Majumdar and Anuradha Panigrahi. They were supported by musical accompanists Saumyajeet Parida, Jyotiranjan Mahalik and Dushmant Das.

The audience were spellbound by the unique rendition of two plays based on the theme of COVID-19 by male and female members of OSA. Conceptualized by Banhi Prava Rath, the plays were directed and executed by Saugat Nayak, Kamal Panda and team. Musical tributes to Bappi Lahiri and Lata Mangeshkar were also given. A unique fashion show was staged by Swati Das and Shubra Samal.